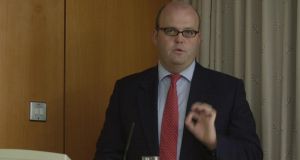 As a former Government adviser, AIB’s incoming chief executive Colin Hunt shouldn’t need to have the political landscape explained to him when it comes to the vexed issue of bankers’ pay across bailed-out lenders.

A report commissioned by the Department of Finance may be set to recommend that executive pay caps and the effective bonus ban be relaxed. But Hunt (48), who previously advised Brian Cowen when he was minister for finance and former minister for transport Martin Cullen, knows that there is little political support for such a move.

The holder of a PhD in economics, who is poised to replace AIB chief executive Bernard Byrne early next year as the latter joins stockbroker Davy’s capital markets division, faces the immediate task of finding a chief financial officer.

Replicating the easy Byrne-Bourke dynamic – they go way back to when they started as trainee accountants in the late 1980s in PwC – will be important for investors, especially as the Government has a further 71 per cent stake in the bank to drip-feed into the market over the coming years.

A share sale any time soon is off the cards, with AIB’s stock trading at 17 per cent discount to last year’s initial public offering, and at a discounted rate of 75 per cent to the tangible value of the bank’s assets.

Much of this is down to European banking stocks being out of favour. Domestically, mortgage lending is growing at a slower pace than bankers would like as Central Bank lending limits weigh, while Fianna Fáil flagged last week – in return for supporting a minority Government for another year – that it would make another stab at legislating to cap home-loan rates.

If Hunt sticks to AIB’s plan to lower its non-performing loans ratio to below 5 per cent next year, paving the way for regulators to approve the release of an estimated €3 billion of excess bank capital to shareholders, it may trigger a rerating of the stock and allow the Government to sell more shares.

Maybe then, AIB can have a conversation with the Government about bonuses.