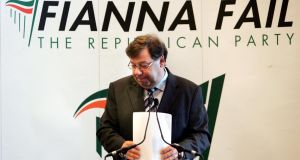 The special liquidators of Irish Bank Resolution Corporation (IBRC), the entity that absorbed failed lenders Anglo Irish Bank and Irish Nationwide Building Society during the financial crisis, are set this week to announce another 25 per cent “dividend” for unsecured creditors, including a €280 million payment to the State.

It will mark the third such payment in as many years. The State has a €1.12 billion unsecured claim against IBRC.

Unsecured creditors, with €1.3 billion of validated and approved claims as of the end of last year, will have received 75 per cent of what they are owed when the latest “dividend” is paid out. The liquidators didn’t respond to a request for comment, while a spokesman for the Department of Finance declined to comment.

Meanwhile, the department spokesman said that David Tynan, a partner with PwC Ireland, had been hired under laws enacted almost a decade ago under Anglo Irish Bank’s nationalisation to assess whether the bank had any equity value when it was seized by the then government in January 2009.

This will determine whether shareholders at the time stand to benefit if any funds are left over from IBRC’s liquidation, after all creditors have been dealt with.

A critical court case involving the family of businessman Seán Quinn early next year will largely decide the scale of recovery of IBRC. The Quinns, in a case originally filed in 2011, claim that Anglo Irish Bank, IBRC’s predecessor, illegally lent them over €2 billion to shore up their investment in the bank in 2008 and that they have no liability for the amount.

It is widely expected Mr Tynan will conclude the bank had no real equity value when it was taken over by the State, as then taoiseach Brian Cowen’s government had to move within months to pump capital into the company as its bad loans soared following the property crash. Taxpayers ultimately committed €29.3 billion to Anglo Irish Bank by the end of 2010.

However, the assessment may prove to be a necessary box-ticking exercise, if there are any surplus funds after the bank’s creditors are addressed.

The fifth progress update on IBRC’s liquidation, published last May, said that the joint liquidators, Kieran Wallace and Eamonn Richardson of KPMG, still expect to pay dividend equivalent to between 75 per cent and 100 per cent of valid senior unsecured claims against the group.

That’s after liquidation fees, estimated to come to as much as €306 million, are deducted. The wind-up is expected to be substantially completed by the end of 2022.

After senior unsecured creditors have been dealt with, any leftover funds would then flow to a group of junior bondholders in Anglo Irish Bank, owed €300 million, who refused to share the burden of the bank’s collapse. This would likely prove to be a politically contentious event.

Next in line are holders of £300 million (€334 million) of Anglo Irish Bank preference shares.

Finally, the outcome of the assessor’s work will decide whether Anglo Irish Bank shareholders on the date of the nationalisation should receive any compensation, if there are available funds at the end of the liquidation, or whether they will be trumped by the State, which committed €29.3 billion to the bank.

The Government has conceded that there is little or no prospect of any of that money being paid back.