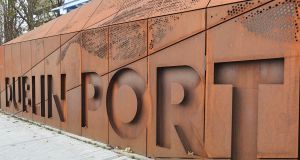 Dublin Port is seeking planning permission for an estimated €320 million worth of projects that will bring it to “its maximum and ultimate capacity” by 2040, according to its chief executive, Eamonn O’Reilly. It involves five key projects scheduled to be finished by 2035, including a new roll on-roll off jetty for ferries up to 240m long. Barry O’Halloran reports.

Employers group Ibec says the Minister for Finance should slash capital gains tax to 12.5 per cent - from 33 per cent - to help entrepreneurs and to lure investment to indigenous companies.

Sinn Féin claims Fine Gael and Fianna Fáil members of the Oireachtas finance committee are seeking to thwart a Bill that would force banks to secure distressed mortgage holders’ permission to sell on their loans.

Ireland’s Data Protection Commissioner (DPC) has asked Europe’s highest court to invalidate Facebook’s main transatlantic data transmission channel, claiming it enables illegal US spying on EU citizens. Derek Scally was in the packed courthouse of the Court of Justice of the European Union in Luxembourg.

Sticking with data protection, Fiona Walsh writes in her London Briefing column that “Surprised and disappointed” probably weren’t the very first words that sprang to Willie Walsh’s mind when he heard that British Airways was to be hit with a whopping £183 million (€205 million) fine for last year’s data breach.

The Irish Aviation Authority (IAA) has invested €30 million in a system that could potentially save lives by pinpointing an aircraft’s location anywhere in the world when an emergency hits. Barry O’Halloran has the details.

In her column this week, Fiona Reddan considers potential changes to state pensions and whether recent comments by the Minister for Social Protection Regina Doherty signals a move to means testing in the near future.

Finally, in commercial property, Ronald Quinlan reports on how a German fund is paying €100 million for a Harold’s Cross build-to-rent apartment scheme.