Christine Lagarde set to be confirmed as next ECB president

European finance ministers signed off on her appointment on Tuesday 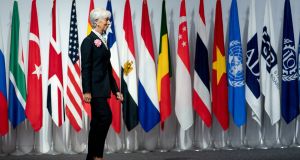 Christine Lagarde is set to be confirmed in October as the next president of the European Central Bank (ECB), after the region’s finance ministers formally signed off on the agreement reached by governments last week.

The recommendation at a meeting in Brussels means the nomination will now go to the ECB’s governing council and the European Parliament for consultation, though neither can block her. The European Union will then formally appoint her in time to replace Mario Draghi from November 1st.

Attention has already turned to who will replace Ms Lagarde as head of the International Monetary Fund. Ministers discussed the process for nominating a European candidate as managing director but don’t have a clear plan and won’t discuss names yet. They intend to come up with a single proposal.

The final decision will be taken by the IMF’s executive board. By tradition over the past seven decades, the post has gone to a European, with the US leading the World Bank, though emerging-market nations have more recently stepped up pressure to play a bigger role.

Luxembourg finance minister Pierre Gramegna said the next IMF chief should be “a European who’s competent and who has great experience in crisis management, that’s what we need”. He indicated that he expects the nominee to be a man, and acknowledged that former Dutch finance minister Jeroen Dijsselbloem “fits the description”.

Mark Carney, governor of the Bank of England, is widely considered to be among the frontrunners. He is Canadian by birth but holds Irish and British passports as well. Governments are actively discussing nominating him, a person familiar with the matter said last week.

French finance minister Bruno Le Maire has said he’s not a candidate, and his compatriot Benoît Cœuré, an ECB executive board member whose term ends in December, has ruled himself out. Any bid by France could falter as both Ms Lagarde and her predecessor, Dominique Strauss-Kahn, were French.

Jens Weidmann, president of Germany’s Bundesbank, has also ruled himself out.

Other possibilities include Bulgarian Kristalina Georgieva, the chief executive of the World Bank. She missed out on the nomination for the European Commission presidency so could fit the bill. Spain’s economy minister Nadia Calviño has also been mentioned as a candidate.

Mr Draghi’s name continues to be floated, despite the Italian being above the IMF’s age limit. Asked about that prospect on Monday, Italian finance minister Giovanni Tria said “he is the one who should be asked about that”. – Bloomberg