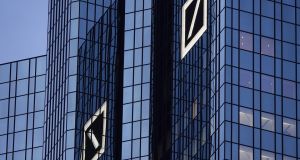 Deutsche Bank’s investment banking chief Garth Ritchie is leaving the bank as it plans to shrink the division radically after five years of decline and a collapse in the German lender’s share price.

On Friday, Deutsche Bank said Mr Ritchie was leaving by mutual consent after more than 20 years, with chief executive Christian Sewing to take responsibility for the division.

The Financial Times reported in May that Mr Ritchie could quit the lender because of disagreement over cuts to the investment bank and a lack of support from shareholders.

The restructuring plan, which will be put to the bank’s supervisory board on Sunday, will lead to as many as 20,000 job cuts and more than €50 billion of unwanted assets hived off into a bad bank.

Paul Achleitner, chairman of Deutsche Bank’s supervisory board, said Mr Ritchie helped the bank “to weather an extremely challenging period and we wish him all the best for the future”. – Copyright The Financial Times Limited 2019

1 Dracula scenario for Irish economy: second outbreak and no-deal Brexit
2 Why the Fed thinks Goldman is America’s riskiest bank
3 Ireland faces 'deep downturn' this year and may not rebound until 2024 if there is a second wave
4 ‘The rental situation stops me moving back home’
5 Why are markets booming when a crash is on the way?
6 Why UK supermarkets are not making super profits
7 John FitzGerald: Civil Service expertise key to Government policy
8 Major works at Rosslare Europort after €30m investment from Irish Rail
9 How much do Irish people earn? And what will Covid-19 do to our wages?
10 Dublin consultancy Pathfinder set for expansion after buyout by Sia Partners
Real news has value SUBSCRIBE