The Irishman’s remuneration could soar to as much as €4.73m 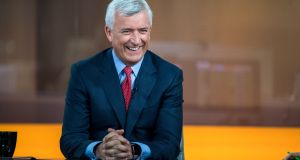 UK banking group CYBG may rein-in its management bonus scheme after courting shareholder ire earlier this year with a plan that could result in Irish banker David Duffy’s remuneration soaring to as much as £4.24 million (€4.73 million).

Mr Duffy, who left AIB in 2015 for CYBG, the owner of Clydesdale and Yorkshire banks and Virgin Money, received £1.83 million in total remuneration last year. At AIB his pay was capped at €500,000 under compensation limits across the State’s bailed-out banks over the past decade.

CYBG is now considering changing its incentive plan for top executives, including Mr Duffy, after 34.2 per cent of investors voted against it at the group’s annual general meeting in January, according to sources.

A spokesman for FTSE 250-listed CYBG declined to comment.

The current plan means that Mr Duffy’s potential bonuses would rise to almost 120 per cent of his salary, while a long-term share payout could reach nearly 180 per cent for the financial year to the end of September. That would bring his total maximum compensation of £4.24 million if all targets were met.

CYBG plans to start retiring its 175-year-old Clydesdale and Yorkshire brands from late 2019 and rebrand itself as Virgin Money UK, after taking over Virgin Money in a £1.7 billion deal last October. Shares in the UK’s sixth-largest bank have slid by more than 28 per cent since the transaction was completed, leaving it with a market value of £2.93 billion.

Influential shareholder advisory group Institutional Shareholder Services (ISS) had come out against the executive pay proposals ahead of January’s annual meeting, as it was too soon after the Virgin Money takeover and the group’s shares had been under pressure from the time of its completion.

However, Mr Duffy has put the stock-price weakness down to the effect of Brexit on the sector.

Last month, the group outlined a number of medium-term financial targets – including plans to cut costs as a proportion of income, drive up profitability, and pay a progressive dividend – in an effort to woo investors. The bank embarked on its first US investor roadshow in two years on Monday.