Deutsche Bank to exit its equities business and post a €2.8bn net loss 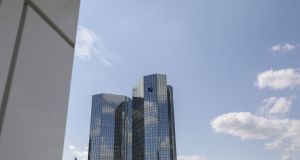 Deutsche Bank’s radical overhaul is slowly taking shape, with a cull of top leadership and better visibility on how many jobs will be cut and how big its non-core bad bank unit will be. Photographer: Alex Kraus/Bloomberg

Deutsche Bank will exit its equities business and post a net loss of €2.8 billion in the second quarter as chief executive Christian Sewing seeks to boost profitability and shrink the German lender’s once-mighty investment banking unit.

The lender expects restructuring charges of €7.4 billion through 2022 to pay for the radical overhaul and will shelve the dividend this year and next, according to a statement on Sunday. About €74 billion of risk-weighted assets will become part of a new non-core unit and the lender’s capital buffer will be reduced as part of the plan, which will avoid tapping shareholders.

The bank said retail chief Frank Strauss and chief regulatory officer Sylvie Matherat, both board members, will leave this month. The departure of investment bank head Garth Ritchie was announced on Friday.

The scale of the revamp underscores the failed turnarounds by Mr Sewing and his predecessors to solve the fundamental problem: costs were too high and revenue too low. After government-brokered merger talks with Commerzbank collapsed in April, the chief executive had few other options to bolster market confidence. His plan was approved by the board at a meeting Sunday.

The statement made no mention of the expected job cuts as part of the plan or changes to the management board. The lender plans to dismiss as many as 20,000 workers as part of its overhaul, according to people with knowledge of the matter.

1 Barclays scraps system monitoring how long staff spent at desks
2 Garda mobile contract win causes concern over Eir’s use of Huawei kit
3 Nineteen staff made redundant by Nama share €1m
4 Varadkar resigns amid warning impasse will hit the economy
5 Facing the music: how China is buying Germany’s piano industry
6 Former Enron CFO Andrew Fastow: ‘You can follow all the rules and still commit fraud’
7 Poll on second election, concerns over Irish pension gap, and Ireland’s rich list
8 Whiskey a go go: sales top $1bn in US
9 How can I view my dead brother’s will if I’m not the executor?
10 Apple and Samsung announce unthinkable partnership
Real news has value SUBSCRIBE