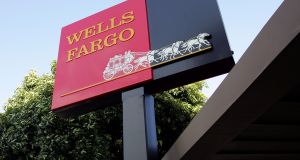 The Central Bank has fined an Irish subsidiary of US bank Wells Fargo nearly €6 million for regulatory reporting breaches and related governance failings.

They included the failure to accurately report the company’s capital position and to comply with a requirement in relation to liquidity testing.

The Central Bank had determined that the appropriate fine was €8.4 million but this was reduced by 30 per cent to €5.88 million in accordance with the bank’s settlement discount scheme.

The fine is the second largest ever handed out by the Central Bank after the €21 million fine it issued to Permanent TSB in May of this year for “serious failings” in relation to the ongoing tracker mortgage scandal.

Last week, the regulator also fined an Irish subsidiary of US investment bank JP Morgan €1.6 million after it was found to have breached Irish financial services regulations.

The Central Bank said it had found “serious and systemic failings” in the firm’s regulatory reporting capability, relating to its failure to calculate and report accurately the firm’s capital position.

It also reprimanded the firm for “weak governance arrangements including lack of robust board and senior management oversight”.

A spokesperson for the US bank said: “WFBI takes its regulatory obligations seriously and we are committed to complying fully with regulatory requirements.

“ We have also integrated continuous review and improvement into how we operate to ensure that our regulatory reporting to the CBI continues to be complete, timely and accurate,” they said.

Seána Cunningham, the Central Bank’s director of enforcement and anti-money laundering, said: “It is a minimum requirement of being regulated by the Central Bank that firms submit accurate and timely regulatory returns.

“Regulatory returns are a tool used by the Central Bank to monitor the financial position of credit institutions and the risks to which they are exposed,” she said. “The submission of inaccurate information undermines the Central Bank’s ability to properly supervise. Miscalculation and misreporting of the firm’s capital position, in particular, is a fundamental failure.

1 Google tells workers to return to country where they are employed
2 Whistleblower warned EY of Wirecard fraud four years before collapse
3 Subway bread too sweet for the Irish tax authorities
4 Will tracker mortgage be at risk if Ulster Bank closes?
5 Sean Quinn stunned at rebranding of Quinn Industrial Holdings
6 Tech Tools: Google Chromecast €70
7 The Devlin hotel operator sues insurer over Covid losses claim
8 Probate is changing: What does that mean for you?
9 Prof Matt Cooper: ‘it’s not about the money; it’s about the patients’
10 Leslie Buckley retires from Digicel board
Real news has value SUBSCRIBE