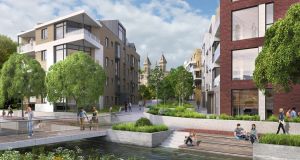 The German fund, Patrizia AG, has agreed to pay about €100 million to acquire 179 apartments being developed by the Marlet Property Group at Mount Argus in Harold’s Cross, Dublin 6W.

Patrizia’s off-market acquisition of the portfolio represents its third investment in the capital’s fast-growing private rented sector (PRS) since its arrival here four years ago.

The company’s first Irish purchase saw it secure ownership in 2015 of 63 apartments at the Park Lodge scheme on the North Circular Road for €15 million, or an average of €238,095 per unit.

In 2017, Patrizia grew its Dublin portfolio substantially when it paid €132 million, or an average of €413,000 per unit, for 319 apartments in the Leona and Charlotte buildings at Cosgrave Property Group’s Honeypark development in Dún Laoghaire.

The Harold’s Cross scheme will include a concierge, resident’s lounge, business centre, meeting room and gym

The company’s latest €100 million deal with developer Pat Crean’s Marlet Property Group will see it pay an average of €558,659 per unit for the 179 apartments at the Mount Argus scheme.

While a cursory examination of the numbers would suggest that Patrizia’s cost per unit has more than doubled since its first investment here, it should be noted that the Mount Argus development represents a rather different proposition to that of Park Lodge.

Quite apart from its mix of one-, two- and three-bedroom apartments, the Harold’s Cross scheme will include a concierge, resident’s lounge, business centre, meeting room and gym, along with a 201-space basement car park. The development is nearing completion, and is expected to be ready for occupation this October. Average rents at the scheme are expected to be about €2,200 per month.

A spokesman for Patrizia AG did not respond to a request for comment on its acquisition of the Mount Argus portfolio, while efforts to contact the Marlet Property Group on its third major deal this year were unsuccessful.

Only last month, the developer and its finance partners, M&G Investments, secured €240 million from Singapore-headquartered Mapletree Investments for the Sorting Office, an 18,766sq m (202,000sq ft) office scheme Marlet is developing in the Dublin docklands. The developer acquired the site from An Post in 2015 in a transaction valued at €40 million.

In April, Marlet completed the €145 million sale of its Charlemont Exchange office scheme to a group of South Korean investors managed by Vestas Investment Management.

Taken together, the three transactions account for €485 million in investment activity. With JLL’s head of research, Hannah Dwyer, recently predicting year-end investment volumes of at least €4 billion, and quite possibly above the record €4.6 billion transacted in 2014, the impact of Marlet’s activity in the year to date is significant.

As the second half of 2019 gets under way, the combined value of the deals secured by Crean and his partners at M&G looks set to be surpassed by just one other party as Green Reit concludes the sale of its €1.5 billion office and logistics portfolio.

Quite apart from being the most significant transaction of 2019, the Green Reit sale will be the largest direct asset sale in the Irish market.

1 How can I view my dead brother’s will if I’m not the executor?
2 Investors pile into property as turnover in build-to-rent sector reaches €2.54bn
3 Provisional liquidator appointed to Dublin engineering firm
4 Bursting of Tesla bubble a case of ‘not if, but when’
5 Kerry’s Chinese sales set for 30% hit from coronavirus
6 Euro zone and Germany back fiscal boost to tackle downturns
7 Apple’s coronavirus sales warning hits global markets
8 Bank of Ireland staff in line for 2.95% pay increase
9 Walmart disappoints with weak sales volumes over Christmas
10 Must you pay a price for ethical investment?
Real news has value SUBSCRIBE