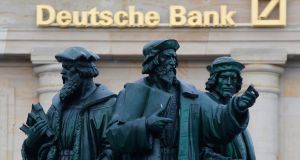 Deutsche Bank has warned its provisions for bad loans will surge to the highest level in more than a decade this quarter. Photograph: Kai Pfaffenbach/Reuters

Deutsche Bank has warned its provisions for bad loans will surge to the highest level in more than a decade this quarter as the coronavirus crisis leaves the global economy mired in recession.

Germany’s biggest lender had earmarked a provision of just €506 million for bad loans in the first three months of the year, but cautioned on Wednesday that the figure would increase this quarter.

“Our expectation would be that credit loss provisions will be in a range around €800 million for this quarter,” James von Moltke, chief financial officer, told analysts on Wednesday at Goldman Sachs’ European Financials Conference.

Analysts were expecting just €630 million in provisions for the second quarter, and €800 million will be up fivefold from a year ago.

Mr von Moltke added that “we would expect that the second quarter will be the peak of the loan loss provisioning for this year”, and that the picture would improve in the second half of the year.

Shares in Deutsche Bank rose 2.6 per cent in early afternoon trading in Frankfurt, close to the highest level since late February.

The optimism on loan losses reflected in Deutsche’s first-quarter provision caused some surprise among analysts given the economic damage wrought by efforts to contain Covid-19. Relative to the size of their loan book, only 10 of the 40 largest European lenders provisioned less than Deutsche, according to data by DBRS Morningstar.

Deutsche has argued that it is less exposed to credit card debt than many of its rivals and that an early lockdown in Germany, where state aid for stricken companies is more generous than in many other countries, will limit the damage to its loan book.

On Wednesday, Deutsche also announced a restructuring of parts of its private bank, its single biggest division by revenue. The business that serves private and commercial clients outside of Germany will become part of Deutsche’s wealth management division in a move intended to eliminate parallel structures in the back office. – Copyright The Financial Times Limited 2020