Seaspray Financial sets up wealth unit with ex-Bof I staff 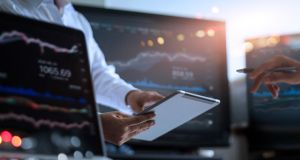 Seaspray Private is aimed at families with more than €500,000 of free cash and typically with total assets of more than €2.5m. File photograph: Getty

Seaspray Private, aimed at families with more than €500,000 of free cash and typically with total assets of more than €2.5 million, will be headed by Danny O’Leary, a former associate director at Bank of Ireland Private Banking which he left last year, having previously been responsible for western, northern and southern regions of the country.

Brian Walsh, an associate director with Bank of Ireland Private Banking for a decade until 2017, was hired by Seaspray last year and has become the wealth management unit’s business development director, said the company.

Adele Taylor, who also previously worked in Bank of Ireland Private Banking, has become the division’s head of client services.

Seaspray Financial was founded by Mr McGowan in 2017 and manages and advises on more than €200 million of assets, spread across a range of funds and life company products on behalf of high net-worth family offices, credit unions and charities. The company has 10 staff.

Seaspray Private will focus more on the management of family wealth, particularly how it is transferred down the generations.