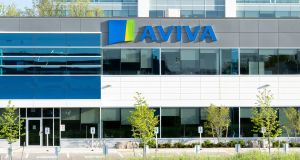 Aviva Life and Pensions Ireland has named Dave Elliot as its new boss following the decision of chief executive Tom Browne to retire at the end of July.

Mr Elliot will take up the chief executive role on August 1st. Mr Elliot is currently chief of staff to the group chief executive at Aviva Plc, having previously served as chief financial officer for Aviva International and director of investor relations. A qualified chartered accountant, he joined Aviva in 2009 and has been a director of Aviva Life and Pensions Ireland since June 2018.

“Tom Browne has made a tremendous contribution to our life business since he joined Aviva following the acquisition of Friends First in 2018. He has overseen the successful integration of the two life businesses and the establishment of Aviva Life and Pensions Ireland as a regulated legal entity in Ireland,” said Patrick Dixneuf, chief executive of Aviva Europe.

“Tom has enjoyed a lengthy and successful career in the insurance sector in Ireland, working with Irish Life, Zurich, Friends First and Aviva over 40 years.”

Mr Elliot, speaking of his appointment, said he believes the business is well prepared to address the “changing and challenging market landscape in 2020”.

“I look forward to meeting and working closely with our people, brokers and customers,” he said.

His appointment comes as Aviva Ireland’s general insurance chief executive John Quinlan remains “on leave” from his role. A senior executive from the insurer’s UK parent is in the company to take on his duties.

Mr Quinlan has been on leave since last November.