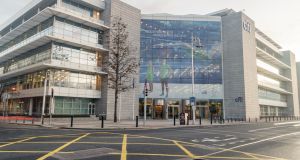 Dublin-based Citibank Europe has deferred until later this year making a call on whether to pay dividends on 2019 earnings to its parent, as it conserves capital amid uncertainty about the effects Covid-19 will have on the business.

The bank, which became Citigroup’s pan-European banking division in 2016, saw its net profit soar 27 per cent last year to $1.12 billion (€980 million) amid a surge in activity in its treasury and trade solutions (TTS) business, according to its latest annual report, filed with the Companies Registration Office in recent days.

The result was also boosted as the company reported a $40.8 million gain on its loan book, compared with a $9.9 million loss for the previous year, partly as a result of it tweaking when a borrower default is determined, in line with regulatory requirements.

Citibank Europe, where Limerick native Cecilia Ronan became chief executive earlier this year, said the question of a dividend being paid to its immediate parent “will be kept under review in light of uncertainties by Covid-19 and will be finalised later in the year after a clearer assessment can be made”.

The bank had as much as $4 billion of capital on its balance sheet at the end of last year above the minimum that is required by regulators, according to Irish Times calculations, based on capital ratios contained in the report and provided by a company spokeswoman. However, banks typically aim for capital ratios that are above minimum regulatory requirements to give themselves a cushion.

Citibank Europe had handed $1.66 billion of excess capital on its balance sheet to its parent between 2017 and 2018. At the end of March, the European Central Bank had asked banks in the euro zone to hold off on paying dividends until at least October.

“The potential impacts from Covid-19 remain uncertainty, including, among other things, on economic conditions, businesses and consumers,” Citibank Europe said in its annual report. “The extent of these impacts on the company are unclear, although they will likely adversely affect its businesses, results of operations and financial condition.”

Citibank Europe operates across 21 countries in Europe. The hub in Dublin has 2,500 employees, more than a quarter of the unit’s total workforce.

Citibank Europe effectively doubled in size to about $50 billion in assets four years ago when the group’s UK-based Citibank International unit was folded into the operation. Its balance sheet has since expanded to $62 billion, mainly as a result of the establishment of a German branch in 2018 that took over previous Citigroup assets that were based in that country.

Ms Ronan was picked in February to head up the business, two decades after the Limerick native began her career with the group in its Dublin human resources department.