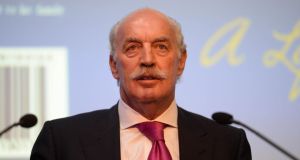 External auditors of the Dermot Desmond-backed Rietumu Banka in Latvia have highlighted that “material uncertainty” following a regulatory clampdown on the country’s financial sector, prompting the bank to rework its strategy, “may cast significant doubt” about its ability to remain a going concern.

While Latvia’s biggest private bank filed its annual report early last month, its auditors at KPMG had delayed the filing of their opinion and report until this week as they assessed the impact of a series of negative developments in the Latvian banking sector this year.

Rietumu, in which Mr Desmond owns a 33 per cent stake, said in the annual report that it has decided to terminate its relationship with 4,000 “high risk” customers – representing two-thirds of its foreign corporate customers.

It follows from Latvia’s Finance Sector Development Council agreeing to ban co-operation between banks and shell companies that have no economic activities, and the country’s financial regulator pressing Rietumu to prepare a new strategy and long-term business plan that slashes its exposure to non-resident customers.

Authorities in Latvia have been seeking to tighten supervision of the sector after the Baltic state’s third-largest lender, ABLV Bank, was put into liquidation in February as the US accused it of using “institutionalised money laundering as a pillar of the bank’s business”.

Also that month, the country’s central bank governor, Ilmars Rimsevics, was detained for 48 hours by anti-corruption authorities over bribery allegations that he denies.

Rietumu said that it expects to complete preparation of its new strategy by June.

“Given that details of the building blocks of the new strategy are not available as at the date of these financial statements, due to the fact that the details of the changes in Latvian legislation are not yet published and adopted into law, there is a material uncertainty . . . that may cast significant doubt on the bank’s and the group’s ability to continue as a going concern,” according to the annual report. This point has been highlighted in the subsequent auditors’ report.

Meanwhile, KPMG also noted how it focused during the audit on Rietumu’s decision to only set aside a provision of €20 million against an €80 million French court fine last year after the bank was “found guilty of aggravated money laundering by providing assistance to placement, concealment or conversion operations of the proceeds of an offence”.

The judgment is under appeal and the provision represents the bank’s “best estimate” of the ultimate cost of the case, as management “is of the position that the enforcement of any final decision” by the French court will require recognition by a Latvian court, according to the annual report.