‘One size fits all’ approach will not work, says insurance body president 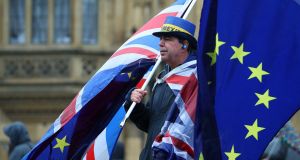 Insurance Ireland president Anthony Brennan has called for negotiators working on the UK’s exit from the European Union to provide certainty as soon as possible over the future of contracts in the event of a hard Brexit and post a transition phase.

Addressing the industry body’s annual lunch in Dublin, Mr Brennan, who is chief executive of Zurich Life in Ireland, said that “getting clarity on the future trading and regulatory arrangements is vital” as allowing existing contracts to run their course would uphold customers’ rights, ensure continuity and reduce uncertainty.

While an EU-UK agreement in March on a post-Brexit transition of 21 months to the end of 2020 would allow for contracts to be “grandfathered” (enforced under old rules) for that period at least, it has been reported that a number of insurers in the UK plan to press ahead with the transfer of policies to Europe.

“It is important that in a highly diverse industry, there is no ‘one size fits all’ approach to Brexit preparedness,” said Mr Brennan. “Insurers are preparing for all eventualities, but their assessments and planning will reflect their risk assessments.”

The comments come less than three weeks after Central Bank deputy governor Ed Sibley said that the insurance sector remains “astonishingly” unprepared for Brexit and that, without action, there are risks that UK and Gibraltar-based insurers passporting services into the Republic will lose their ability to continue to provide insurance coverage.

Mr Sibley said on April 12th that the regulator had received 197 responses from insurance firms recently, following a request for updates on their Brexit preparations. Of these, 38 companies deemed the event would have a “high impact” on their business models and a further 12 had rated it as having a “medium impact”. The remaining 147 – almost three-quarters – think Brexit will have little or no impact on them, he said at the time.