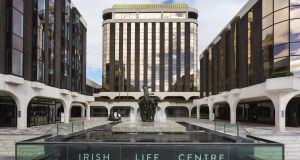 Irish Life’s profits dropped 48 per cent in the first quarter of the year, delivering a lower contribution to its Canadian parent as the result was weighed down by some “exceptional items”.

Net profit at the Irish company declined to €28 million for the period from €54 million, year on year.

“Our business performance was on target for the first quarter of 2018 and we are seeing particularly strong growth in defined contribution pension business, which is an influencing factor in the recent announcement of Irish Life’s plans to acquire a strategic shareholding in independent broker, Invesco Ltd (Ireland),” said David Harney, chief executive of Irish Life.

Irish Life’s owner, Great-West Lifeco, which acquired the Dublin-based group in 2013 for €1.3 billion, said on Thursday that its net profit rose to 731 million Canadian dollars (€474.8 million) in the first quarter from $591 million or the corresponding period last year.

Irish Life, which has been in existence for over 75 years, has 1.3 million customers in the areas of life insurance, pension, investment and health insurance.