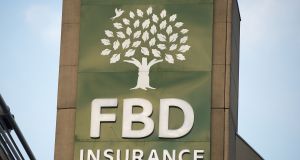 FBD is investing in its 34-strong branch network and a rebranding programme. It plans to open a second Dublin branch on Baggot Street in June

FBD Insurance expects to take a hit of nearly €7 million as a result of claims from Storm Emma, one of the worst snowstorms to hit Ireland in decades.

FBD chairman Liam Herlihy will tell investors at the group’s agm in Dublin on Saturday morning that it received 1,200 claims to date relating to the storm, predominately in the east and south of the country.

“We are currently working closely with our customers to compensate them for the damage caused to their homes, farms and businesses,” Mr Herlihy will say.

“ Our catastrophe property reinsurance programme has worked well to protect FBD and mitigate the net impact of this storm,” he will say.

The insurer has also been hit with what it describes as “attritional weather claims” because of the prolonged poor weather.

Despite the jump in claims, Mr Herlihy will assure shareholders that the underlying profitability of Ireland’s only publicly-listed insurer continues to be sound.

“In this current low interest rate environment investment income continues to be very low, and as a result our focus is on underwriting discipline and careful growth in our core markets of farm, business and consumer as the Irish economy expands,” he will say.

The group is investing in its 34-strong branch network and a rebranding programme. It plans to open a second Dublin branch on Baggot Street, Dublin, in June, cementing its expansion into the urban market.

The firm, which traditionally specialises in providing protection for rural SMEs, opened its first Dublin office in Drumcondra last year.

1 ‘The recovery needs to be a full-scale economic renewal’
2 Michael Smurfit: ‘I asked Trump to invite me to the White House for my 80th birthday’
3 Tax and the Pandemic Unemployment Payment: Your questions answered
4 Ryanair expects air fares to fall when flights take off again
5 ‘I’m so lucky to be in the Caribbean – a million miles from Derry Girls’
6 Minister calls on EU to act against tobacco firms ‘undermining’ menthol ban in Ireland
7 Brexit, coronavirus and bark beetle pose challenges for Coillte
8 Small businesses are cannon fodder in zealous anti-virus experiment
9 Lioncor gets planning permission for ‘house of Europe’ project
10 Ireland stands to benefit in a big way from investing in public transport
Real news has value SUBSCRIBE