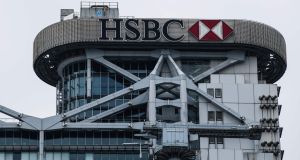 HSBC’s revenues remained strong at the start of the year, with adjusted revenues coming in at $13.9 billion.

John Flint has made a shaky start to his tenure as HSBC chief executive after costs rose faster than expected in the first quarter, overshadowing a $2 billion (€1.67 billion) share buyback and sending the bank’s stock down as much as 2.7 per cent in Hong Kong.

HSBC also set aside $897m illion to cover the cost of “legal and regulatory” matters, which was linked to progress in talks with the US justice department to settle its probe into mis-selling of mortgage securities before the 2008 financial crisis.

Europe’s biggest bank by assets, which earns most of its profits in Asia, has long struggled to hit its cost control targets. Mr Flint said the 8 per cent rise in underlying quarterly costs reflected investments in its Chinese and UK retail banking operations, its Chinese securities joint venture and digital improvements across the group.

“The global economy is in terrific shape right now so we want to take advantage of that by investing in the business,” Mr Flint told the Financial Times. “Last year the rate of costs growth exceeded revenue growth until the full year, and that is very much the shape of what we expect this year to look like.”

The bank said on Friday it would initiate its $2 billionn share buyback soon but it was likely to be its only such repurchase this year. Analysts at UBS said they had expected it to buy back twice as many shares. Such buybacks boosted investor confidence in the bank last year, pushing up its share price from the five-year low it hit in April 2016.

Reported operating expenses climbed 13 per cent year-on-year to $9.4bn, thanks to costs related to the bank’s expansion and the provision for the expected US settlement. Adjusted for various one-off items, they were up 8.2 per cent.

“The ‘bad’ element was cost development where cost growth outstripped revenue growth,” said Joseph Dickerson, banks analyst at Jefferies. “Cost efficiencies offset inflation and regulatory costs, and there was an incremental $400m year-on-year growth due to investments in growth and digital.”

Return on equity for the bank fell compared with the same quarter last year, from 8 per cent to 7.5 per cent. Cross-town rival Standard Chartered reported this week that it was on track to hit a target of 8 per cent return on equity in the medium term.

The results for the quarter were the first presented with HSBC’s new leadership duo in place. They are due to present their new strategy at or before their interim results in early August.

Mr Flint, HSBC’s former global head of retail banking, took over  from Stuart Gulliver in February, hours after announcing a lacklustre performance for 2017. Mark Tucker, the former head of insurer AIA, became the chairman of HSBC in October, taking over from Douglas Flint.

Signing off after a turbulent seven-year tenure, Mr Gulliver spent much of his time managing scandals and winding down businesses while trying to bring the bank back to revenue growth.

He succeeded on the last front, bucking a six-year decline in annual revenues, but was also forced to disclose that HSBC faced at least $1.5 billionn in penalties over alleged tax evasion and money laundering connected to its Swiss private bank — a sign that such troubles will fall to another generation of leaders.

In the first quarter, adjusted pre-tax profit hit $6.03bn, or 3 per cent lower than the same period last year, but slightly above analyst expectations of $6bn. Net profit declined 1.4 per cent to $3.09bn.

Profit was higher in all divisions except global banking and markets, which Mr Flint said was hit by “weakness in rates and credit” – adding that he was “not concerned about it”. Profit also fell at the corporate centre, reflecting a hit to revenue from repositioning its bond holdings to anticipate higher interest rates and a one-off charge for revaluing some assets under new accounting rules for financial instruments.

Rising interest rates helped the bank generate more profit from a large base of deposits after years of low rates in the US pushed down margins. “The Hong Kong dollar is now at the weak end of the peg [to the US dollar] so it’s possible that we’ll have a more sustained rise in Hibor rates soon,” Mr Flint said.

Pre-tax profits from its Hong Kong operations hit a new record of $3.15bn, providing more than half the total for the group.

Revenues remained strong at the start of the year, with adjusted revenues coming in at $13.9 billion, 3 per cent higher than a year ago, hitting analyst projections. Loans grew by $17 billion, or 2 per cent, in the first quarter. The bank said it would call $6bn of convertible bonds paying an 8 per cent coupon to refinance them with lower-cost securities.

1 Angela Merkel sweeps in to save the euro zone
2 Irish company MyBio to sell 10-minute Covid-19 antibody test
3 In six months we will be in the grip of a 1980s-style recession
4 What’s the real picture behind the May exchequer returns?
5 Don’t expect a bonanza for Ireland from the EU’s €750bn recovery cash
6 Fexco to cut 150 jobs as Covid-19 bites
7 Perrigo tells court of ‘very high level of unfairness’ in €1.64bn Irish tax bill
8 What will it take to reopen the world to travel?
9 Property price drop of up to 12% this year a ‘reasonable’ assumption – McDonagh
10 Here's the best free software to keep everybody occupied
Real news has value SUBSCRIBE