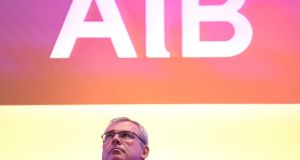 The three final overseas bidders for a portfolio of up to €2 billion of non-performing AIB loans are using Irish-regulated vehicles to overcome mounting political opposition to portfolios being bought by firms beyond the Central Bank’s oversight.

Apple beat revenue and profit expectations in its March quarter as it sold 52.2 million iPhones, barely below Wall Street targets and showing some resilience as global demand for smartphones wanes. The news was less upbeat for Snapchat’s parent firm, with user and revenue growth falling below expectations, sending its shares tumbling more than 10 per cent.

The three final overseas bidders for a portfolio of up to €2 billion of non-performing AIB loans filed final bids by a deadline on Monday, using Irish-regulated vehicles to overcome mounting political opposition to portfolios being bought by firms beyond the Central Bank’s oversight. Joe Brennan has the details.

Joe also reports that Ulster Bank executives have declined an invite to appear before the Oireachtas finance committee to explain the circumstances behind the temporary disappearance of money, including monthly salaries, from customers accounts late last month. In what may be perceived as a snub to the committee, the bank said: “We will not be in a position to provide any further update.”

Worker anxiety is growing in Heaton’s as British group Sports Direct International completes its takeover of the Irish department store chain. It is understood that the new owner plans to rename the Irish outlets shortly, some as Sports Direct, others with an as yet unknown brand, following the deal, which was the subject of a court battle late last year.

In a rather foreboding column, Cliff Taylor outlines how Brexit, a looming trade war and proposed international tax changes are forming a nasty cocktail of uncertainties to threaten Irish growth over the next couple of years.

You may not believe it, but Ireland actually got less expensive as a place to live when compared with other EU countries in 2016. However, sharp price growth across the region still placed Ireland as the fourth most expensive location in 2016, according to a new study from the Central Statistics Office (CSO).

Cork-based motor group Johnson and Perrott has bought National Truck Rentals, which hires out commercial vehicles to many of the Republic’s largest companies. It comes as the latest sales figures show new car registrations rose. New car sales rose in Ireland, for the first time in more than a year, in April. However, overall sales for the year are still down by 4.68 per cent.

State-owned health insurer VHI is to cut the cost of its plans by an average of 2 per cent from July. The move comes after it announced a net surplus of €75.3 million last year as membership numbers rose.

Finally, in commercial property, Jack Fagan reports on the upcoming €4.25 million sale of the Grafton St home to Swatch shop, and the sale of a Lucan land bank for €30,000 to €50,000 per acre.