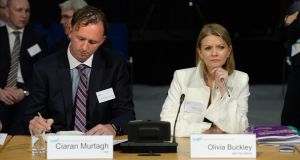 A European Commission proposal to tax the digital turnover of big tech firms could be challenged legally if it gets across the line, the Irish Tax Institute (ITI) has warned.

The institute’s tax policy director, Cora O’Brien, said legal challenges could be brought against the measure on several grounds, including that it is discriminatory by singling out digital companies.

It could also be opposed on the grounds of proportionality or whether such a turnover tax is compatible with existing EU law, Ms O’Brien told the Oireachtas finance committee on Thursday.

In response to the outcry over multinational tax avoidance and the suggestion that companies are exploiting outmoded systems to shift profits to low-tax countries, the commission wants to impose a 3 per cent levy on the digital revenues of large corporations such as Google, Facebook and Amazon

However, the ITI said such a unilateral move by the EU could create protracted global tax disputes and potentially damage the bloc’s competitiveness.

She also raised concern the measure might be used as a bridge to harmonising corporate taxation across the bloc, a move that is seen as a threat to the Republic’s coveted 12.5 per cent corporation tax rate.

The institute acknowledged there was now an acceptance that the established corporate tax framework, which taxes profits based on where value has been created, had not evolved to match the digitalisation of global businesses.

“The effectiveness of existing global tax rules is challenged by the ongoing digitalisation of the economy,” the ITI communications director Olivia Buckley said.

“While we accept that the challenges of taxing the digital economy must be addressed we believe that when it comes to international corporate tax, a global rules-based system based on international agreement is critical,” she said.

“What the EU is proposing is a unilateral measure to something that needs a global response. It is important to have the same rule book for all countries,” she added.

Ministers from smaller EU nations, including Ireland, Luxembourg and Malta, opposed the plan at an EU ministerial meeting in the Bulgarian capital, Sofia, last month also arguing that an overhaul of digital taxation should be done at a global level and with a long-term solution.

Also attending the Oireachtas committee was Sorley McCaughey, head of advocacy at Christian Aid, who said the EU’s digital economy proposals were too focused on one part of that economy, namely the provision of digital services in a country such as online advertising, software or access to online content, without having a taxable presence in that country.

“They will not deal [and are not intended to deal] with a much more pervasive area of activity: the way that online or digitally-facilitated sales mean that non-digital goods and services can be sold in a particular country, and the sales booked in a low-tax jurisdiction,” he said.

1 Should my mam wait for house prices to drop before buying?
2 Parts of Brown Thomas and Arnotts to reopen next week
3 Brother is dragging his heels as executor of uncle’s will - is there anything I can do?
4 Apple tax case: Four individual lawyers paid over €500,000 each
5 US takes aim at digital services taxes in EU
6 Irish whiskey sales near milestone of 12m cases a year
7 Man charged with stealing €31,000 from company account
8 Covid-19 mortgage breaks: What’s the catch?
9 Pet product firm’s directors restricted from involvement in companies
10 Irish comic book artist designs face mask coverings for young flyers
Real news has value SUBSCRIBE