Billionaire to become partner in fund managed by Metric Capital 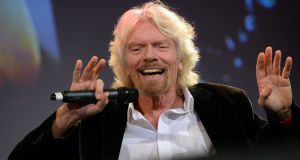 Richard Branson is getting into private equity.

RRichard Branson, the billionaire British entrepreneur, will become a private equity executive for the first time as he seeks to raise €500 million from global institutional investors to strike deals for consumer businesses worth up to €2 billion.

The founder of Virgin Group is set to become a partner in a new fund co-managed by Metric Capital, a London-based investment firm with about $2 billion assets under management. Two people familiar with the plans confirmed details of the fundraising.

John Sinik, founder of Metric Capital, has known Sir Richard for more than two decades from his days at UBS. Since its inception, Metric has generated a realised internal rate of return of roughly 30 per cent, according to figures seen by the Financial Times.

“I have been impressed by the development and growth of Metric Capital,” Sir Richard said. “Their experience in the rapidly changing consumer and digital markets is particularly attractive and I look forward to helping John and his team with this new fund.”

Sir Richard’s business empire grew from a humble mail-order record house, set up in the late 1960s, into a multimillion-dollar music business while Virgin Group now owns stakes in more than 100 companies.

The fundraising comes as buyout funds raise record amounts of capital at the fastest pace in their history, with yield-starved investors desperately looking for a place to park their cash.

When investing in companies, the fund — the first of three to be launched in the next few years — will look at companies where it is believed that Sir Richard’s affiliation with the firm will give the company the potential to grow faster than it would do with anyone else, these people said.

It will look at luxury goods, leisure, food and beverage, and other consumer-related businesses, they added.

“The idea is that the fund will see more deal flow and companies will be more likely to take its money because of its links with Sir Richard,” one person involved in the fundraising said.

However, some industry insiders said the fund could simply be looking to leverage Sir Richard’s personal brand and connections, with no meaningful involvement.

But unlike other high-profile individuals who act as advisers to private equity funds, Sir Richard will be a partner in the fund with a minority stake. Sir Richard, who has experience investing in private equity funds including TPG’s Rise fund, will help evaluate deals and use his network to seek opportunities.

The fund, which will aim for the 20 per cent returns that private equity groups typically target, will give 10 per cent of the profits that it generates to women’s and children’s charities.

It will look to tap large institutional investors such as Canada’s CPPIB and Saudi Arabia’s PIF, and will invest in Europe and the US.