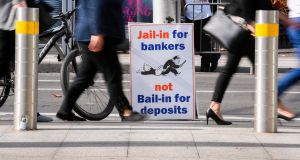 A placard outside the royal commission set up in February to investigate misconduct in Australia’s banking sector. Photograph: William West/AFP/Getty Images

During the global financial crisis, Australia’s banks were relatively unscathed by what was happening elsewhere in the world. They didn’t need bailouts, so there was a tendency, at least from the government and the banks themselves, to believe everything was hunky dory. Nothing to see here.

But there was plenty to see, and there has been for a long time.

In 2009, the Australia and New Zealand Banking Group (ANZ) – one of Australia’s “big four” banks, along with Commonwealth Bank of Australia (CBA), National Australia Bank (NAB) and Westpac – paid hundreds of millions of dollars in a settlement to investors.

In 2012, CBA also paid 268 million Australian dollars (€167 million) in compensation to investors in a financial advice company. In 2014, ANZ had to refund A$70 million to customers after a “major glitch”. And, in 2016, Westpac was fined A$1 million for failing to make reasonable inquiries about some customers’ income before increasing their credit card limit.

With the major banks and many other financial institutions featuring on newspaper front pages for alleged sharp practices as often as they featured in the business pages for their extraordinary profitability (CBA’s profit was A$9.8 billion last year), it was not surprising when, in April 2016, the opposition Labor party leader Bill Shorten said: “Scandal after scandal: enough is enough. There needs to be a royal commission [into banking].”

Royal commissions have coercive powers greater than those of courts. There is, for example, no right to silence. If a question is asked, you have to answer it. It is Australia’s highest level of inquiry.

It is a serious business and only meant to be employed for the most pressing of public concerns (though several commissions have stretched that definition and were seen as political, not public concerns).

Labor tried to force a royal commission through parliament 23 times in just over a year, but it did not have the numbers and it was voted down every time. As late as November 22nd last, prime minister Malcolm Turnbull said: “There is not going to be a banking royal commission.”

But three weeks later, after restive backbenchers in Turnbull’s Liberal-National coalition said they would cross the floor on the issue, a royal commission was established “to inquire into and report on misconduct in the banking, superannuation and financial services industry”.

Though it was public pressure on coalition MPs in marginal seats that finally led to the commission, nobody could have foreseen the huge volume of terrible behaviour that has emerged since public hearings began in March.

It was revealed, for instance, that financial services company AMP had repeatedly lied to the Australian Securities and Investments Commission (ASIC) and had interfered in the drafting of an independent report. The company’s chief executive, Craig Meller, resigned with immediate effect. But that didn’t hurt as much as the hit to its share price – which fell by more than A$1 billion.

AMP’s head of financial advice, Anthony Regan, tested the patience of senior counsel Michael Hodge, acting for the commission. Hodge asked Regan why his answers, such as referring to “a culture that is not as robust as it should be”, were so passive. Regan eventually got to the point, saying of one example: “Well it’s clear that we preferenced the interest of shareholders . . . at the expense of clients.”

Since then, the bad news has continued. AMP chairwoman Catherine Brenner has followed Meller out the door, its share price has fallen further and the company is likely to face an investor class-action suit which could cost it billions of dollars.

If the revelations about AMP shocked on a grand scale, a revelation that CBA financial advisers had been charging dead clients for advice was more personal. One adviser knew a client had died in 2004 but continued to charge service fees.

More than a decade after the customer’s death, the adviser was still getting paid fees of A$65 a month.

A whistleblower said: “Money exchanges hands in cash in envelopes, white envelopes, usually over the counter. The money is deposited at CBA so NAB can’t detect the deposits. [It has been] happening on a daily or weekly basis and has been happening for a number of years.”

The extent of the revelations has been so shocking that the same government ministers who insisted for 18 months that there was no need for a royal commission are now talking tough as if it was their idea all along.

“What has been admitted to in the royal commission by AMP is deeply disturbing. They have said that they basically charged people for services they didn’t provide and they have admitted to statements that were misleading to [the regulator] ASIC and to their own customers, and this is deeply distressing,” treasurer Scott Morrison said. “This type of behaviour can attract penalties which include jail time. That’s how serious these things are.”

This is the same Scott Morrison who previously said Labor demanding a royal commission was “nothing more than crass populism seeking to undermine confidence in the banking and financial system, which is key to jobs and growth in this country . . . I would describe it as a cynical exploitation of people’s genuine concerns and the politicisation of their pain by Bill Shorten.”

Morrison is hoping the Australian public has a very short memory. But Labor will be working every day to make sure the banking royal commission haunts the government all the way to next year’s election which, if the current polling numbers hold, will see it thrown out in a landslide loss.

Financial authorities in New Zealand have met the country’s biggest banks seeking assurances they are not engaged in the sort of misconduct exposed at their Australian parent banks by a powerful judicial inquiry.

The Australian royal commission into banking has been a publicity disaster for Australia’s major lenders, all of which own New Zealand banks, turning out revelations of widespread corporate malfeasance since it began in February.

“To date we haven’t seen any evidence of systemic abuses along the lines of the Australian industry, but as we’ve said to the New Zealand banks, we can’t afford to be complacent,” Financial Markets Authority chief executive Rob Everett said this week.

“We’ve asked them to provide assurances to us . . . that they have scrubbed their business models, and that they have a basis for being confident that these issues don’t exist here.”

A deadline was not set and the the authority expects it will be weeks before the banks reply, it was reported. If they fail to co-operate “then they’ll see more of us in court”, Mr Everett said.

“Confidence in the financial services sector is important, so we’re very happy to co-operate with the regulators on their inquiry,” he said.

ASB said banking operations and products were “simpler” in New Zealand, that it had an independent board and a “different culture” to Commonwealth Bank’s, which was roundly criticised on Tuesday by Australia’s prudential regulator.

“However, there are also similarities and therefore we will be working with our regulators to demonstrate why the issues raised in Australia do not apply here or, where we can learn from the royal commission,” it said in a statement.

None of the other banks had an immediate reply to requests for comment.

ANZ Bank, Westpac and ASB agreed during 2014 and 2015 to pay a total of 24 million New Zealand dollars (€14 million) in compensation after admitting to engaging in misleading conduct over the sale of interest rate swaps to New Zealand farmers. – Reuters