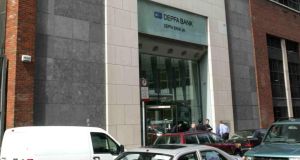 Depfa Bank in Dublin. Figures contained in Depfa’s annual report suggest the bank was sitting on as much as €812 million of excess equity capital. Photograph: Cyril Byrne

The German state’s bad bank tasked more than three years ago with winding down Dublin-based Depfa Bank has confirmed that a sale of the former public-sector lender is being considered.

While Hypo Real Estate agreed to sell Depfa under a restructuring plan tied to its own bailout during the financial crisis, the German government pulled the sale in 2014 and transferred the business to state-owned bad bank, FMS Wertmanagement (FMS-WM).

FMS-WM said on Tuesday as it reported full-year results that “besides pursuing the successful wind-up strategy, selling the Depfa Group or parts of it is also a possible option”.

The Irish Times reported last October that FMS-WM was weighing a second attempt to sell Depfa. However, it is likely that FMS-WM would seek to take out the bank’s excess capital before going about a disposal.

Figures contained in Depfa’s recently-published annual report suggest that the bank was sitting on as much as €812 million of excess equity capital. Any move to remove capital would need the approval of the Central Bank.

A series of asset and liability transactions with FMS-WM have helped Depfa to reduce its total assets by 60 per cent since the end of 2014 to €18.6 billion in December. Depfa’s net profit almost doubled last year to €95 million.

FMS-WM was founded in 2010 to wind up assets transferred to it from Hypo Real Estate. A decision by the German government in May 2014 to abandon the sale of Depfa resulted in its remaining assets being transferred to the bad bank.

FMS-WM’s pretax profit from ordinary activities rose to €429 million last year from €391 million in 2016. However, it expects its earnings to slump this year to “a break-even to slightly positive result”, as a result of its shrinking portfolio and absence of significant one-off income.