A total of €12.5 billion of orders was received for the bonds 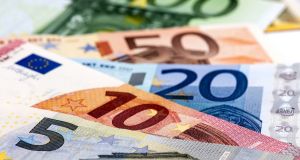 The National Treasury Management Agency has raised €4 billion from the sale of 15-year bonds through a group of banks on Tuesday.

The State’s debt management agency received a total of €12.5 billion of orders from 190 international investors for the bonds, including €2.35 billion from the syndicated of banks working on the deal, the agency said in a statement. The debt was priced to carry a coupon, or interest rate, of 1.319 per cent, based on prevailing market rates.

The NTMA said on Monday that it had hired Barclays, Cantor Fitzgerald Ireland, Goldman Sachs, HSBC, Natwest Markets and Society Generale to lead the transaction. It was originally expected that the deal would raise €3 billion.

The latest transaction brings to €10.25 billion the amount the NTMA has raised from long-term debt sales so far this year. The agency intends to raise between €14 billion and €18 billion in 2018 as it prepares to pay for the repayment of €8.9 billion owed to bond investors in October and lines up for further redemptions in the coming years.

“Today’s transaction confirms that investor appetite for Irish bonds remains healthy and broad-based, enabling an increase in the transaction size to €4 billion,” said Frank O’Connor, director of funding at the NTMA.

4 Supply of Covid vaccine doses held up by manufacturing delays