Irish Life workers to strike on Thursday over pensions 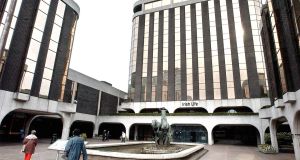 Irish Life HQ. Irish Life, which currently employs about 2,500 people, had shut off its defined-benefit plan to new employees at the end of 2006, in line with many other companies in Ireland.

Almost 800 Irish Life employees who are members of the Unite union are set take strike action on Thursday in response to the company’s “unilateral decision” to close the company’s defined benefit pension scheme to future accruals in the middle of this year, even though it currently has a €240 million surplus.

The 24-hour stoppage will be accompanied by a rally outside the group’s headquarters on Dublin’s Lower Abbey Street at noon on Thursday, the labour union said on Tuesday.

“As the country’s largest pension provider, people up and down the country trust Irish Life to ensure their pension security in retirement - yet the company is threatening the pensions security of its own workers,” said Joe Conroy, chair of Unite’s Irish Life committee.

The State’s largest life insurance and pensions group signalled last year that it intended to stop making contributions to the plans where retirement payments are linked to the final salary of employees.

It planned to transfer affected staff to a defined-contribution plan, where benefits are tied to the performance of employer and staff investments in individuals’ pension plans. The plans affected are the Irish Life Staff Benefits Scheme and Canada Life Irish Pension Scheme.

Irish Life, which currently employs about 2,500 people, had shut off its defined-benefit plan to new employees at the end of 2006, in line with many other companies in Ireland.

Overall, the schemes have more than 3,300 members including almost 800 of Unite’s members in Irish Life. Unite said the pension schemes had never been in deficit, and currently had a surplus of €240 million, with assets of about €1.1 billion.

The decision to close the defined benefit scheme will result in workers losing up to 35 per cent of their anticipated retirement income, according to Unite. The union’s members voted in favour of industrial action last month.

Irish Life was acquired from the State in 2013 by Canada’s Great-West Lifeco for €1.3 billion.