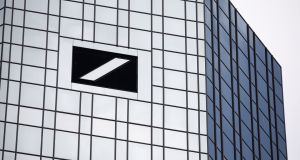 Three successive years of losses at Deutsche Bank were ultimately too much for ousted chief executive John Cryan to bear. Photograph: Alex Kraus/Bloomberg

Strange times at Deutsche Bank. After a messy falling out that dragged on for several weeks, Deutsche chairman Paul Achleitner finally bounced John Cryan out of the chief executive’s chair over the weekend, installing one of the two deputy chief executives, Christian Sewing.

Three successive years of losses under Cryan were ultimately too much to bear. So far, so good, although the unseemly spectacle of a chairman openly conducting a recruitment campaign for a chief executive in the face of the incumbent’s denial that he was going anywhere did nothing for the reputation of the bank.

However, it is difficult to square the appointment of Sewing with recent reports that at least two top investors in the bank didn’t think either he, or his fellow deputy chief executive Marcus Schenck, were ready for the position.

Schenck clearly did but his identification with the troubled unit counted against him. Passed over, he has now decided to walk.

Ironically, one of the winners in the c-suite merry go round is Garth Ritchie. Co-chief executive of the investment bank unit with Schenck, he was widely reported as recently as last week to be considering leaving the bank.

Now Schenck has gone and Ritchie is staying put, having been given full control of the investment banking arm. He has also been elevated to the deputy chief executive position vacated by his former colleague.

The suspicion is that these latest changes had better work, or that the future of Achleitner himself will come into sharp focus. Some in German banking circles already consider him more part of the problem than the solution.

The bank’s chief operating officer Kim Hammonds apparently told colleagues recently that Deutsche was “the most dysfunctional company” she had ever worked for. On the evidence of recent weeks, it’s hard to disagree.