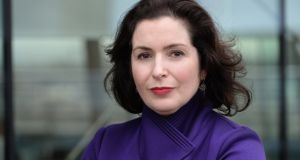 Bank of Ireland chief executive Francesca McDonagh said that if the bank wanted to enable customers and communities to thrive it must reflect the diversity of those customers. Photograph: Dara Mac Dónaill

Bank of Ireland has committed to increase the number of women in top roles. From the end of 2021, all new management and leadership appointments will follow a 50:50 gender ratio.

Chief executive Francesca McDonagh said that if the bank wanted to achieve its purpose of enabling customers and communities to thrive it must reflect the diversity of those customers. While the make-up of the executive ranks will not necessarily be equal in gender terms by 2021, all new appointments will be under this strategy.

Ms McDonagh was speaking at the launch of the bank’s “responsible business report”, which details its charity donations, sponsorship schemes and contributions to the Irish economy.

Only last month, Ms McDonagh acknowledged there was more work to do on gender balance at the bank amid disappointment that only one woman, Maureen Stanley, had been promoted to her executive committee as part of her shake-up of senior management ranks.

‘More work to do’

Ms McDonagh, a former HSBC executive, conceded at that time that Bank of Ireland had “more work to do” to promote greater gender diversity on its senior management team.

“I would love to have an increasingly diverse team. It’s not complete, but I also have to work with the pipeline of talent that I have within [the bank],” the chief executive said. “We have some really talented women that I’m very keen to see contributing at the top table. We have to look at how we can bring more women along the career path, but that does take time.”

At present the bank has a 55:45 female-to-male ratio among its staff, but that is not reflected in the management and leadership teams, which are just 36 per cent female. The move to improve gender diversity at executive levels follows the bank joining the “30 per cent Club”, an organisation committed to better gender balance across member organisations.

According to Ms McDonagh, the organisation is continuously striving to improve the culture within the business. This stems from its goal of rebuilding trust in the bank.

“Being part of a workforce that raised €2.8 million for charitable organisations, reduced CO2 emissions by 24 per cent and supported 5,200 sports clubs around the country brings a sense of pride,” she said.

Bank of Ireland’s UK units recently reported statistics on the gender pay gap, under requirements introduced in 2017. There it said the mean gap in gender pay was 24.6 per cent at one entity and 38 per cent at the other. The gender pay gap measures the difference between the earnings of all men and women across an entire organisation.

In Monday’s report the bank welcomed the UK reporting requirement and said it looked forward to the outcome of the government’s plans to take measures to reduce the gap in Ireland.