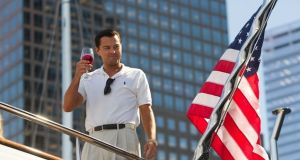 The Wolf of Wall Street producer Riza Aziz, who is the stepson of former Malaysian prime minister Najib Razak, has been charged with embezzling millions of dollars from the Malaysian government.

Riza, who ran a Hollywood production company Red Granite Pictures, appeared in a Kuala Lumpur court on Friday morning charged with five counts of money laundering, accused of receiving $248 million into Swiss bank accounts from the Malaysian state fund 1MDB, which was controlled by Najib. Each charge carries a five-year jail sentence.

Riza is now the third member of the former first family of Malaysia to face multiple charges linked to misappropriated 1MDB funds.

Najib, who was toppled from power in May 2018, is facing 42 corruption charges and his first trial of at least three is ongoing. Najib’s wife and Riza’s mother, Rosmah Mansour, has also been charged with 17 counts of money laundering.

The 1MDB scandal, described as the biggest corruption scandal in Malaysian history, involved billions of dollars being embezzled from a government fund and fraudulently spent around the world.

Some $681 million (£516 million) of 1MDB money went into Najib’s personal bank account, where it is alleged it was used to fund the lavish spending habits of Najib and Rosmah.

The US justice department believes more than $4.5 billion was stolen overall. The couple deny all wrongdoing.

Riza has been accused of receiving the 1MDB money into a bank account in Switzerland and then transferring the funds in smaller amounts, between $1.2 million and $133 million, into a Red Granite bank account in the US.

He has pleaded not guilty to all charges and was granted bail of 1 million Malaysian ringgit ($240,000).

It was a US justice department investigation that first accused Red Granite productions of using stolen 1MDB money to fund Hollywood productions, from Wolf of Wall Street to Dumb and Dumber 2 and Daddy’s Home.

In March last year the company agreed to pay a $60 million fine, though it stated that the payment was not “an admission of wrongdoing”.

Red Granite was a relative unknown on the Hollywood scene before it stumped up $100 million to help director Martin Scorsese make The Wolf of Wall Street.

Three months after shooting began, Red Granite also presented the film’s star, Leonardo DiCaprio, with the Oscar given to Marlon Brando for On the Waterfront, worth around $600,000, as a lavish birthday present.

DiCaprio has since surrendered the statue as part of the 1MDB investigation. – Guardian Service

1 Sean Quinn stunned at rebranding of Quinn Industrial Holdings
2 Probate is changing: What does that mean for you?
3 Will tracker mortgage be at risk if Ulster Bank closes?
4 Dublin Aerospace takes over Flybe’s aircraft servicing base at Exeter Airport
5 Irish golf tourism faces ‘wipeout’ unless Covid travel restrictions eased
6 Irishwoman Adrienne Gormley joins N26 as chief operating officer
7 Me & My Money: ‘Money can’t buy you happiness but it can make life a lot easier’
8 Three Ireland switches on 5G network around the country
9 Swedish newspaper eyes best financial result this century
10 Mortgage breaks will not be extended beyond this week
Real news has value SUBSCRIBE