All change in the upper ranks of the Central Bank

Cantillon: Governor Philip Lane has big decisions to make about future of regulator 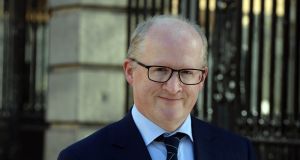 With Cyril Roux on gardening leave as deputy governor of the Central Bank of Ireland and Bernard Sheridan having assumed his duties in an interim capacity, attention has turned to how the regulator plans to fill the role on a more permanent basis.

Roux’s remit was broad, covering financial regulation across a number of headings. Meanwhile, Sharon Donnery is deputy governor for central banking. A report on Bloomberg on Friday suggested that the Central Bank was now considering splitting the role in two.

One model could involve prudential regulation and consumer protection being separated into different roles. An alternative one involves the regulation of domestic banks being separated out from the oversight of the large international financial sector here. This might make sense if there is an influx of firms and investment funds into Ireland post-Brexit.

Central Bank governor Philip Lane was quizzed by Sinn Féin’s Pearse Doherty about his plans to fill the role, which has yet to be advertised, even though Roux resigned in February.

“The scale of financial regulation is so demanding, we are trying to come up with a configuration which ensures that entire sphere is promptly handled,” the governor said. “Within a number of weeks, we will have a revised set-up. Until that set-up is there, I do not want to launch a competition [to fill Roux’s position]. It will be soon but it makes sense to have a little bit of reconfiguration which we are working through.”

Sheridan is currently the director of consumer protection, a position that he will combine with his interim role as deputy governor (financial regulation) until the autumn, when he will take up the role of director of corporate affairs.

This is a position that will become vacant in the autumn when John Coyle leaves the regulator.

So the decks are clear for the governor to implement change in the structure of the leadership team.