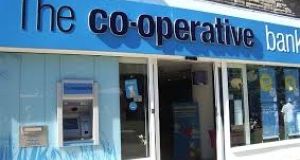 The Co-operative Group in Britain has fallen into the red for the first time since 2013 after writing off the value of its stake in the troubled Co-operative Bank.

The mutual revealed pre-tax losses of £132 million for 2016 as it took a £185 million hit after slashing the value of its 20 per cent holding in the Co-operative Bank to zero.

The Co-operative Bank has been put up for sale amid concerns over its balance sheet strength as it continues to suffer following its 2013 rescue after the discovery of a £1.5 billion black hole in its finances, which left it majority controlled by US hedge funds.

Losses at the Co-op Group come against profits of £23 million in 2015 and mark the first time it has fallen back into the red for three years, when it was plunged into crisis as the full scale of the woes at the banking business emerged. It said the move to write off its stake in the Co-op Bank was a “prudent valuation” amid “volatility” caused by the ongoing sale process.

The group had already marked down the value of the shareholding to £140 million at its half-year results, from £185 million in 2015. But it said the hit would not disrupt its overhaul of the mutual and investment plans. On an underlying basis, pre-tax profits fell to £59 million from £81 million in 2015. Steve Murrells, group chief executive of the Co-op, said: “We’ve made great progress in rebuilding our Co-op, with all our businesses delivering strong performances. “While much remains to be done, our rebuild plans have really started to deliver value for our customers, our members and their communities.”

But the group gave a cautious outlook for the year ahead despite a solid year for its three main businesses — convenience stores, funeralcare and insurance. It warned: “All of our markets remain fiercely competitive and we face a challenging consumer and economic backdrop.”

1 Johnny Ronan loses out on €315m Dublin docklands deal
2 Bank of Ireland takes €169m charge for 1,700 job cuts
3 How much state pension will I get next year?
4 Ryanair and Aer Lingus to cut further flights from regional airports
5 How long can Government afford to keep State pension age at 66?
6 Liquidators appointed to Irish arm of Wirecard
7 Tesco takes to the skies with home delivery by drone
8 Meath site primed for delivery of enterprise and employment
9 DAA warns of confusion on airport Covid tests
10 Am I crazy to consider switching to an Ulster Bank mortgage?
Real news has value SUBSCRIBE