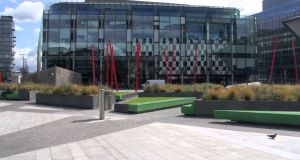 Citadel Securities, the largest US equity trader, has opened an office in Dublin as part of a European expansion and plans to employ at least 50 staff by 2019.

The Chicago-based firm, founded by billionaire hedge fund manager Ken Griffin, plans to hire a full team of front-office traders and market makers. The move is seen as a vote of confidence in the Irish financial sector.

The company, which has been quietly operating here since the start of the year, with an initial staff of 15 traders, analysts and programmers, said the Dublin operation will extend its options and ETF [exchange-traded funds] business into Europe for the first time.

The firm rejected suggestions the move represented a “Brexit hedge”, insisting the decision had been taken prior to the UK’s referendum. It also noted that it had expanded its London workforce by 25 per cent last year.

Citadel Securities has taken out a 15-year lease on a 18,500sq ft penthouse office at 1 Grand Canal Square, one of the city’s prime office locations, which comes with an annual rent of €1.1 million.

The operation is being headed up by ex-JP Morgan Ireland chief financial officer Jonathon Lowey, who said the plan was to increase the workforce to 25 by the end of the year and to 50 by 2019.

Mr Lowey said Citadel’s decision to locate here was primarily down to the availability of a talented labour pool. He also said the company’s decision could be seen as part of a new wave of high-value financial investment in Ireland.

“Ireland is moving up the value chain and quickly becoming one of Europe’s top financial centres and the arrival of Citadel Securities signals further growth in the existing cluster of front office jobs here,” he said.

The firm is running a novel recruitment drive in University College Dublin this weekend. It is hosting a problem-solving “Datathon” for 80 graduates from UCD, Trinity, Dublin City University, Cambridge, Oxford and elsewhere.

The winning four-person team will be awarded €25,000 and an interview for a full-time role at Citadel.

The firm’s move here was facilitated by the IDA. “Citadel Securities is creating high value technology roles and will strengthen our existing position in the ETF market where we are focused on winning additional investment for Ireland,” IDA boss Martin Shanahan said.