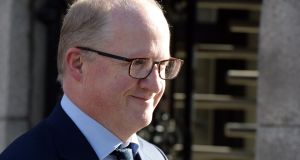 Damned if you do and damned if you don’t. That might be how Central Bank of Ireland governor Philip Lane was feeling on Tuesday after his grilling at the Oireachtas finance committee about rising house prices.

For most of last year the Central Bank was under pressure from various sources to loosen its macroprudential rules to assist first-time buyers to get on the property ladder.

Lane and the Central Bank said they would review these rules every 12 months to ensure they were still fit for purpose, and, if there were a material change to circumstances in the market or a threat to the financial system, it would act.

On Monday, data compiled by Davy and leading property website myhome.ie, which is owned by The Irish Times, showed that house prices nationally rose 9 per cent in the first quarter and 10.2 per cent in Dublin.

These are saucy increases, although they refer mostly to second-hand home sales rather than new builds and prices are still about 40 per cent off their 2006 peak. And the number of properties for sale is at an all-time low.

Fuel to the fire

A number of members of the Oireachtas finance committee wanted to know from Lane what the Central Bank planned to do in response.

Chief among them was Fine Gael Senator Kieran O’Donnell, who suggested that the relaxation by the Central Bank of its mortgage rules had added “fuel to the fire”. He asked why Lane wasn’t intervening now instead of waiting eight months to announce the results of its annual review, he asked.

It was a tactical move by O’Donnell to lay the blame at the door of the Central Bank, rather than focusing on the possible inflation effect of the help-to-buy scheme, which was introduced by his own party at the beginning of this year.

This scheme offers windfalls of up to €20,000 for first-time buyers purchasing new builds and has cost the State an estimated €72 million since being introduced in January. That’s well above the original estimate for the full year of €50 million.

It was a political policy move designed to circumvent the Central Bank’s rules on mortgage lending. The regulator isn’t a fan of the scheme, and Lane suggested that it had played a part in the price inflation we’ve seen so far this year.

While the measure might support the business case for developers seeking funding to build new homes in the long run, it has had no effect on supply in the short term. But it has fuelled demand.

As Lane noted, other factors are also at play. The improving economy and rising employment levels, the current low level of interest rates , along with a dysfunctional rental market whereby it’s cheaper to service a mortgage than pay exorbitant rents to a landlord.

He suggested that an increase in the supply of housing was needed to temper price rises. This is more easily said than done.

Builders cite delays in the planning system and difficulties with local authorities. The rejection by Dún Laoghaire-Rathdown of the application by IRES-REIT to build 456 apartments in Sandyford is a case in point.

This process will be streamlined from May when developers will be able to apply directly to An Bord Pleanála for schemes comprising more than 100 housing units or more than 200 student bed spaces. It’s one element of a set of proposals put forward last year by the Minister for Housing Simon Coveney to tackle the housing crisis.

Developers also cite a lack of capital as a problem, particularly in building apartments, where a large chunk of funding is required up front to complete a block. By comparison, a housing estate can be developed piecemeal, easing the capital burden.

As noted in the Davy/MyHome report, house -building activity is stepping up but not at a quick enough rate. The completion of 14,900 homes in 2016 was an improvement on the previous year but still the lowest number since 1970, when the property bubble years of the early- to mid-noughties are excluded.

And it is only half the number that various experts tell us we need to support household formation in the country.

Pearse Doherty’s solution to house price inflation is to suspend the help-to-buy scheme. It’s an understandable response from the Sinn Féin TD but would be hugely disruptive to those who have factored the subsidy in to their plans to purchase a house.

Buying a home is among the most stressful things in life and first-time buyers wouldn’t thank any politician for pulling the rug from under them just as they were about to get a foot on the property ladder.

Similarly, amending the Central Bank’s rules just months after they were tweaked would only create more confusion and dysfunction in the market.

Both measures have to be given at least a year to bed in before their impact can be accurately assessed. As do the Government’s initiatives to increase supply.

This is no time for knee-jerk reactions.