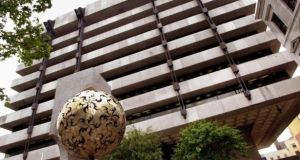 The governor and deputy governor of the Central Bank of Ireland will each receive pay increases of about €7,000 this month as part of an unwinding of the Government’s Fempi legislation on public sector pay.

The changes in remuneration were agreed by the Central Bank commission at its meeting on February 28th.

The Fempi legislation was first introduced in 2009 and granted emergency powers to the government to reduce public sector pay and pension costs following the economic crash. It was amended in 2015 under the Lansdowne Road agreement to allow for partial restoration of pay.

A number of Central Bank staff are also due to receive “merit leave” having achieved or exceeded the goals set for them last year on their balanced scorecard.

Gerry Quinn, the Central Bank’s chief operating officer, said its headcount at the end of last year was 1,600 full-time equivalents, compared with a forecast of 1,630.

A net increase in staffing of about 200 was planned for this year and Mr Quinn said this would be a “significant challenge” as labour supply in the wider economy was “getting more competitive”.

The minutes also note that the sale of the Central Bank’s former headquarters on Dame Street closed in January for €67 million.

The meeting also heard about the recent establishment of the Financial Stability Group, which comprises top-level membership from the Central Bank, the Department of Finance, and the National Treasury Management Agency.

Its terms of reference include an assessment of risks and emerging risks to the financial system and economy, systemic crisis management co-ordination, including contingency planning and the implementation of financial sector crisis-management measures, and discussions of economic financial system policies that have repercussions for financial stability in order to achieve optimal policy outcomes.