AIB-owned First Trust to cease printing own banknotes in North 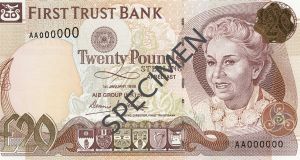 First Trust cited commercial reasons for the decision to cease printing its own banknotes.

First Trust Bank, which is part of AIB, is to stop printing its own banknotes in the North and will dispense Bank of England sterling from its ATM network instead. The ATM move, which marks a break with the tradition of banks in the North issuing banknotes under their own masthead, takes effect this week.

First Trust cited “commercial reasons” for the move and pointed to growing usage of digital payments and mobile technology.

Its competitors in the North – Bank of Ireland, Ulster Bank and Danske – will all issue new polymer banknotes in the North later this month.

But First Trust said it plans to stop issuing its own banknotes next year for “commercial reasons”.

Mr Moynihan added: “For most people this decision means they should begin receiving Bank of England banknotes instead of First Trust Bank banknotes from our ATM network.

“Any of our banknotes currently in circulation can be used as normal until 30th June, 2022, with special exchange arrangements in place after that date for any remaining banknotes in circulation.”

The bank said all First Trust banknotes in circulation will gradually be withdrawn up to June, 2022.

AIB customers in the Republic will be able to exchange any First Trust banknotes for Bank of England equivalents at any AIB branch, also until June, 2022.