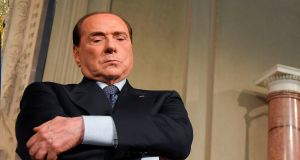 Italian banking group Banca Mediolanum, backed by the country’s former premier Silvio Berlusconi, has settled a tax dispute over its Irish investment management arm with authorities in Rome at a cost of as much as €103 million

Italian banking group Banca Mediolanum, backed by the country’s former premier Silvio Berlusconi, has settled a tax dispute over its Irish investment management arm with authorities in Rome at a cost of as much as €103 million. Joe Brennan has the details.

Good news on the startup front this morning as the Guinness Enterprise Centre (GEC), a not-for-profit working space located in the Liberties area of Dublin, is embarking on a major ¤10 million expansion that will almost double capacity. The centre currently hosts 85 companies employing more than 400 people. Once completed, the expanded development will see the GEC becoming home to 160 start-ups with 750 employees. It will also have capacity for a further 220 co-working companies.

The State’s National Broadband Plan (NBP) faces “existential threats”, including “significant risk” of overspend and delays in its current guise, an Oireachtas committee will be told on Thursday. In his opening statement to the Public Accounts Committee (PAC), which has been seen by The Irish Times, Imagine Communications Group chief executive Seán Bolger will also ask whether changes to the membership of the last remaining consortium bidding for the project have “consequences for the integrity of the project and the outcome”.

The Government’s new pension auto-enrolment scheme could undermine” the existing private pensions system, as its proposal to offer tax relief of 25 per cent is “not optimal” and could lead to tax arbitrage between the two systems, pensions experts have warned.

Dairy co-op Lakelands moved closer to a takeover of rival LacPatrick after one of two regulators scrutinising the deal gave an initial indication that it would have no impact on competition.

In her column this week, Fiona Reddan argues that it’s a shame an initiative suggested by the Central Bank of Ireland back in 2017, to bring some sort of rigour to the disclosure of fees for financial advice, hasn’t yet come to fruition – or progressed a jot.

Meanwhile Fiona Walsh’s London briefing considers the flawed inflation measurements used in the UK, while also warning that Debenhams troubles far from over, despite yesterday’s positive developments with the banks.

Finally, in commercial property Justin Comiskey reports on the sale of Dublin’s Reflector office building in the south docklands for €155 million, currently occupied by AirBnb amongst others. He also has news on the sale of the former DIT Kevin St campus for €80 million.