Bank was one of first to take concrete steps on Brexit 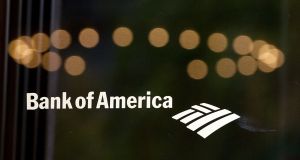 Bank of America’s Irish business now has up to €50 billion in assets. Photograph: Getty

Bank of America vice-chairwoman Anne Finucane said the group has spent about $400 million (€353.5 million) preparing its business for Brexit, an exercise which has centred around setting up its EU hub in Dublin.

Ms Finucane, who also is chairwoman of the Irish unit, Bank of America Merrill Lynch Europe, said that even if the UK decided ultimately not to proceed with exiting the EU, Dublin would remain its European headquarters.

“There is no return there,” she said at a finance conference in Dublin hosted by IDA Ireland and the Financial Times. “The bridge has been pulled up on that.”

Bank of America has also established its EU broker dealership for the trading of shares, bonds and other securities in Paris.

The New York-based group completed the merger of its former main EU bank in London with the Dublin operation last December, resulting in a business with up to €50 billion of assets and about 800 employees, split between offices in Leopardstown in Co Dublin and Hatch Street in the city centre.

Bank of America Merrill Lynch was one of the first banks to put in place concrete plans to deal with the uncertainty surrounding the UK’s decision to exit the EU in March.

Separately, UK banking giant Barclays’s chairman Gerry Grimstone said Brexit preparations have set it back as much as £200 million (€228.3 million), with the group having established the Republic as its main EU banking subsidiary.

Mr Grimstone said that the group’s new Irish hub will have staff of up to 400 people, with 1,700 bankers across continental Europe working directly for it.

“We identified a couple of years ago when we started Brexit planning that there were huge opportunities for us at Barclays,” he said. “We haven’t been dragged kicking and screaming to this. This is something we see as an advantage.”

1 Explainer: what is the row about SF’s multinational tax plan?
2 Britain after Brexit will not be alone, but it will be lonelier
3 EU eyes phasing out smallest euro cent coins
4 Getting out from under ‘never-ending’ Celtic Tiger debt burden
5 Personal insolvency practitioner to pay €6,000 after providing misleading details
6 Election 2020: Parties' pledges on housing simply don’t add up
7 Banks withdrawing from ATMs – another failure of regulation
8 Pensions: Estonia plans to unleash a potential €4.85bn on economy
9 BBC announces 450 jobs will go in newsroom shake-up
10 Marlet snaps up 1.8 acre Sandyford site for €17m
Real news has value SUBSCRIBE