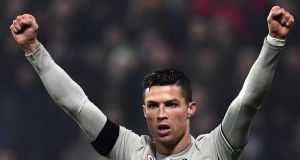 A football jersey introduced by Juventus after Ronaldo’s signing sold out in two months. Photograph: Getty

Juventus is looking to tap the international bond markets for the first time, as the storied Italian football club seeks to raise fresh funding after paying €100 million to sign Cristiano Ronaldo last year.

The club, which is listed on the Milan Stock Exchange, is looking to raise €150 million of five-year debt, expected to offer a yield of around 3.5 per cent. Morgan Stanley is leading the bond sale, along with Italy’s UBI Banca. The bond does not carry a credit rating.

The bond’s prospectus indicates that the club will use the new funds to repay existing debt. As of June, Juventus had €310 million of debt, including loans with Italian banks such as Monte dei Paschi di Siena and factoring facilities with lenders including UniCredit.

The bond’s investor presentation highlights that the club’s revenues have risen 161 per cent over the past eight years, reaching €402 million in the 2017/18 period. It also refers to the Agnelli family, which acquired Juventus in 1923 and is still majority owner, as a “stable and committed” shareholder.

Ronaldo’s €100 million signing fee, a figure which excludes €12 million of additional expenses, is listed at the top of a “key acquisitions” section of the deal presentation. It also flags that a football jersey introduced after Ronaldo’s signing sold out in two months.

Juventus is not the first Italian football club to tap the international markets in recent years, with Goldman Sachs helping Inter Milan raise a €300 million bond at the end of 2017. Inter Milan is majority owned by Chinese retail conglomerate Suning.

Inter’s crosstown rivals AC Milan raised a similar amount of debt from US hedge fund Elliott Management earlier that year, to help fund a Chinese businessman’s acquisition of the club. Elliott dramatically took over the club last year after this Chinese owner was unable to keep paying its substantial debt.