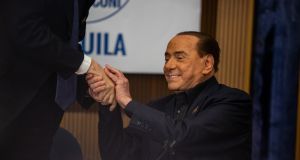 Silvio Berlusconi said last month that he will stand in the European Parliament elections in May after a ban from holding public office was lifted by a Milan court last year.

Italian banking group Banca Mediolanum, backed by the country’s former premier Silvio Berlusconi, has settled a tax dispute over its Irish investment management arm with authorities in Rome at a cost of as much as €103 million.

Italy’s Guardia di Finanza, or finance police, demanded early last year that the Milan-based group pay €544 million to the country’s tax office amid a dispute over the residency of its Irish arm, Mediolanum Asset Management.

Group chief executive Massimo Doris told analysts on Tuesday that while the Italian tax revenue agency, which took over the case, concluded the unit’s Irish tax residency, it considered that the parent group “had a greater involvement” in the business “than had been previously recognised”.

As a result, the authorities concluded that the Dublin-based unit owed its Italian parent more taxable income for transactions between both, under so-called transfer pricing arrangements.

“In order to avoid a lengthy legal process, we settled directly with the tax agency and agreed to pay €69 million net, including interest, for the years 2010 to 2013,” said Mr Doris, adding that it had made a €7 million settlement for the following four years, and set aside €27 million of additional provisions to deal with further liabilities relating to the case.

That brings the total impact to €103 million, he said. Mediolanum is working with Irish and Italian tax officials to define transfer-pricing arrangements for the next five years, which will determine what will be subject to tax in either country.

Mediolanum Asset Management, established in Dublin two decades ago, has seen its workforce expand from 65 employees in 2015 to 112 , with plans in place to have 125 on its payroll by the end of this year. Some 40 of the staff are investment professionals.

At the end of 2018, the firm has €36 billion of assets under management, making it the third-largest investment company in Ireland, after Pioneer Investments, which is owned by France’s Amundi, and Irish Life Investment Managers.

Mediolanum Asset Management recently took on a long-term lease on 19,000sq ft (1,765sq m) of office space in The Exchange building in Dublin’s International Financial Services Centre (IFSC) and expects to complete the move from its base in Ballsbridge, in Dublin 4, by the end of March.

The Mediolanum group is 30 per cent owned by Mr Berlusconi’s family investment vehicle, Fininvest. The four-time Italian prime minister has spent more than four years fighting financial regulatory efforts to get Fininvest to lower its holding to 10 per cent, after he was convicted for tax fraud in 2013.

Bank of Italy first ordered the stake sell-down in October 2014, saying it no longer considered the business mogul to be fit to own more than a 10 per cent interest in a financial company. The European Central Bank, which subsequently took over the regulation of euro-zone banks, made a similar determination two years later.

While Mr Berlusconi had secured the backing of an Italian administrative court to hold on to the stake, the European Court of Justice ruled days before last Christmas that it will have the final say on the matter.

Mr Berlusconi (82), who stepped down as premier in late 2011, said last month that he will stand in the European Parliament elections in May, after a ban from holding public office, on foot of his tax fraud conviction, was lifted by a Milan court last year.