After Brexit, expected influx of banks is not even a trickle

A year and a half after the historic vote, not one new bank or lender has been authorised 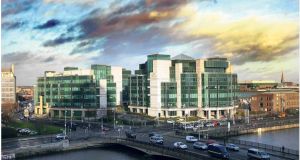 Since Britain voted to leave the EU, we’ve been waiting for international financial institutions to set up here, but Ireland’s banking sector is still bereft of new players. Photograph: Bryan O’Brien

It’s 19 months on from that historic Brexit vote, but, despite expectations, the banking sector in Ireland is still largely bereft of new players.

While Brexit has coincided with announcements from existing players, such as Bank of America, Barclays Bank and JP Morgan, that they will substantially expand their Irish operations, the expected flow of new financial services companies is not even a trickle, never mind a steady stream.

Figures obtained from the Central Bank of Ireland show that last year not one new bank or lender was authorised.

In fact, the flow of new authorisations is going in the opposite direction, with one revocation: the German DZ Bank gave up its license having closed its Dublin branch in 2016.

In recent years, a number of banks serving the international, wholesale markets have closed their doors, including Dresdner, Commerzbank, Deutsche, Sachsen and Helaba.

On the insurance front, the flow of new companies looks a little healthier. There were a number of insurance authorisations, including Lloyd’s of London insurer Beazley, which is one of the few Brexit wins for Dublin.

Its new European-focused operation may employ up to 24 people over three years, while UK-based Chaucer set up an Irish platform to write international specialty insurance and reinsurance business.

Bermuda insurer Everest Insurance also came to Dublin during the year, in order to keep its access to the European market, while Volkswagen Reinsurance company was established to provide reinsurance services for the car maker.

Also new to the scene is Finance for You, a Kerry-based money lender which was authorised by the Central Bank during 2017. It offers loans over a 52-week term, at a maximum APR of up to 64.47 per cent, and was established by Brian Leslie, of Kerry-based debt management company PrimaFinance. The company says it offers an alternative to banks and credit unions.