State’s best fund manager: based in Edinburgh, invests outside the UK 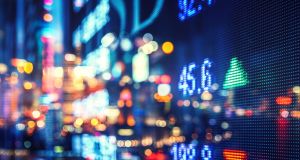 Adam Rudd manages about £3.9 billion and is largely steering clear of the UK. Photograph: iStock

Ireland’s best fund manager may be based in Scotland, but his performance has been driven by investing outside the UK.

Aberdeen Standard Investments’s Irish managed fund posted a 9.3 per cent return in 2017, compared with an Irish active managed funds average of 7.3 per cent, according to Rubicon Investment Consultancy. While Adam Rudd, investment director at the firm’s multi-asset team, is based in Edinburgh, his fund is aimed at Irish pension funds.

As concerns around Brexit mount, Mr Rudd, who manages about £3.9 billion (€4.4 billion) in all, is largely steering clear of the UK in favour of emerging markets.

“The likes of Royal Dutch Shell, British American Tobacco and Diageo will be fine if there’s a hard Brexit but the upside potential is limited, “ said Mr Rudd (34). “We are long emerging markets relative to UK.”

The MSCI Emerging Markets Index rose 34 per cent last year, compared with an 8 per cent increase in the FTSE 100 Index, and has had its best start to a year since 2012. UK prime minister Theresa May is still grappling with her divided Conservative party over what kind of Brexit Britain should seek, though it seems likely that UK banks will lose easy access to European Union markets.

“If banks have to ring-fence UK balance sheets, that’ll have implications for some firms,” said Mr Rudd. “HSBC has plenty of capital elsewhere so it shouldn’t be affected but other firms may need to rein in their non-UK business if most of the capital is being generated from the UK.”

Mr Rudd prefers Asian technology stocks, such as Tencent Holdings, Alibaba Group and Baidu. In all, 75 per cent of the fund is invested in equities.

“There is a structural shift from fixed stores to online,” he said. “Even though tech companies have done well so far, that trend has a long way to go.”

The other attraction of emerging market stocks? They’re cheaper than elsewhere. Samsung Electronics trades at seven times forward earnings. Compare that to Apple which is running at 15 times forward, Mr Rudd said.

“It’s not that Samsung is an inherently better company, it’s that it’s much cheaper,” he said.

Mr Rudd, who has earmarked 12 percent of the fund for bonds, likes local currency debt in Russia, Mexico, Brazil and Malaysia, in his hunt for yield.

He gives the example of Mexican two-year bond which yields about 7.5 per cent “on a lot of fear about the US pulling out of Nafta but we believe that has been overly priced in,” he said.

Neither is he dismissing UK stocks entirely, as he likes a group of firms including Trinity Mirror and Thomas Cook.

“These may have unattractive business models so the stocks are very cheap but if there is anything like consolidation or a slight up-tick in their market, then they would offer very strong returns,” said Mr Rudd.