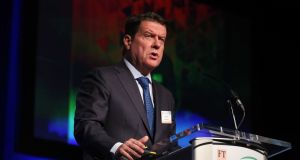 Addressing the European Financial Forum conference in Dublin on Wednesday, Morgan Stanley president Mr Kelleher said: “Our view is the market is going up and what we see are healthy corrections.”

The comments come after the Dow Jones Industrial Average, which has hit record highs 84 times since Donald Trump’s election as US president almost 15 months’ ago, fell by more than 2 per cent in the first two sessions of this week – the biggest drop since September 2016. Government bonds have also sold off in recent days.

European Central Bank executive board member Benoit Coeure, also speaking at the event in Dublin where more than 600 participants are registered, was similarly reassuring, saying that recent action in the US government bond market “is unlikely to signal a looming recession” as similar moves may have indicated in the past.

Mr Coeure was referring to a phenomenon where short-term bond yields, or market interest rates, are currently rising at a faster pace than long-term yields. He said that a narrowing of the differential was down to cross-border flows of capital and investors not expecting a spike in inflation.

Mr Kelleher confirmed that Ireland is figuring in Morgan Stanley’s post-Brexit plans, alongside Frankfurt and Paris. The Wall Street investment banking giant said last July that it was preparing to apply for a licence to set up a fund management company in Dublin to maintain access to investors in the European Union after the UK exit.

Such a move would allow Morgan Stanley to continue to market its funds in the EU, while the actual decisions on investments would continue to take place outside Ireland. Morgan Stanley has selected Frankfurt as the legal location for its new EU trading hub.

Mr Kelleher said decisions on actual job movements as a result of Brexit would be made by Morgan Stanley “very early this year”.

“What the politicians don’t understand is that these are people,” he said of the affected individuals.

Also addressing the conference, Central Bank governor Philip Lane said that it is essential that even if firms with significant exposure to Brexit are hoping for a “soft type” of UK exit from the EU, they need to be prepared for downside risks.

The final impact on Ireland as a host for international trade in financial services will depend on the outcome of the EU27-UK negotiations,” he said.

Speaking to rpeorters on the sideline of the event, he said: “I think it’s always very important that countries identify the ambitions that they have to be represented at key European institutions.” The Republic is the only founding member of the euro not to have held a seat on the six-member executive board of the ECB.

Taoiseach Leo Varadkar told the third annual such gathering in Dublin of international and Irish bankers and insurance and asset management executives that the Government “is very keen to do whatever we can” to win more financial services as a result of Brexit.

The European Commission’s vice-president Valdis Dombrovskis has advocated a “strong convergence” in of financial services rules and supervision between the European Union and United Kingdom following Brexit.