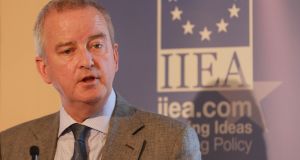 British-Irish Chamber of Commerce’s John McGrane: “If Brexit means pulling the plug on the unrestricted supply of electricity to the island, there will be no winners.”

Any disruption to the single electricity market of the Republic and the North after Brexit will have a “severe impact” on the Irish economy, according to the British Irish Chamber of Commerce.

It argues that the UK-Irish energy sector should be in a position to maintain and deliver a secure, increasingly decarbonised and affordable flow of energy to consumers at the end of the negotiations.

It highlights the “significant level of integration” within the sector between the Republic, the North and Great Britain.

The paper argues that any curtailment on the current arrangements between the UK and Ireland will have a negative impact on consumers in the Republic and the North, while also jeopardising energy security.

British Irish Chamber of Commerce director general John McGrane said the single electricity market “can rightly be described as one of the first substantial arrangements” between the Republic and the North that stems from the Belfast Agreement.

British Irish Chamber of Commerce Energy and Environmental Committee chair Mark Varian said “no other country” relies on a neighbour in the same way as the Republic does in relation to the UK’s energy sector.

“This level of integration within the sector improves our security of supply and reduces energy prices for consumers,” he said.

“Therefore, it is of upmost strategic importance to Ireland, both North and South, that the outcome of the Brexit negotiations takes into account the inter-linkage of the two energy markets.

“Any outcome that jeopardises the current arrangements will have a severe impact on the Irish economy. It is therefore imperative that the needs of the Irish energy sector get the attention from policymakers in Ireland and Europe that it deserves and needs.”

Consumer media revenue down a third in April at Daily Mail owner 08:54
GSK to produce 1bn doses of coronavirus vaccine booster in 2021 08:42
CNOOC will not exercise rights to buy Tullow stake in Uganda fields 08:38
Hong Kong stocks fall amid concerns over possible US sanctions 07:49
EasyJet, American Airlines to cut 30% of staff amid coronavirus disruption 07:31

1 Ross O’Carroll Kelly column 'not racist towards English people'
2 Irish economy to contract by 12%, ESRI forecasts
3 What is in the EU’s €750bn recovery plan and how will it affect Ireland?
4 Brown Thomas and Arnotts shoppers will be able to book time slots for entry
5 Beware of the rush to get back to normal business amid Covid-19
6 GSK to produce 1bn doses of coronavirus vaccine booster in 2021
7 EU needs to rebuild GDPR after only two years
8 Irish banks’ failure to innovate could leave them written off for good
9 O’Leary casts unwelcome light on a very Irish political compromise
10 Michael Smurfit: total lockdown of economies a ‘serious mistake’
Real news has value SUBSCRIBE