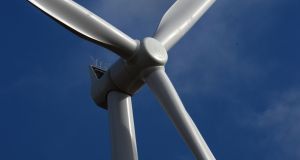 Renewable energy producers are compensated when the wholesale price of electricity falls below the tariff guaranteed to them under the Refit scheme. Photograph: Dara Mac Dónaill

Consumers and businesses carry the burden for the State’s €400 million renewable energy support scheme, which adds more than €6 a month to average household electricity bills, experts say in a new study.

Households and businesses are paying an extra €400 million through the public service obligation levied on their electricity bills to support wind and other forms of renewable power.

The Commission for Energy Regulation revises the tariff every October. Last year it increased the overall public service charge by €76 million to €400 million. This resulted in every home in the Republic paying an extra €6.02 a month for electricity, a total of €72.28 from October 2016 to October 2017, when the commission will revise the payment.

The charge pays for the State’s renewable energy feed-in tariff (Refit) scheme, which supports “green” generators by guaranteeing them a price for the electricity they produce.

A study by Mel Devine and Niall Farrell of the Economic and Social Research Institute and William T Lee of the universities of Portsmouth and Limerick, says the system means that electricity users, rather than those investing in renewable energy, are the ones exposed to price fluctuations.

The system means that renewable energy producers are compensated when the wholesale price of electricity falls below the tariff guaranteed to them under the Refit scheme.

The ESRI paper argues that policymakers should look at spreading the burden of risk more evenly between electricity customers on the one hand and renewable energy producers on the other.

While the paper does not propose any alternative to Refit, it states that the issues it highlights will become more relevant as the number of renewable generators continues to increase.

Devine, Farrell and Lee also point out that investors tend to have more influence than consumers when it comes to designing schemes such as Refit.