Investors snap up rights to take part in Tullow deal 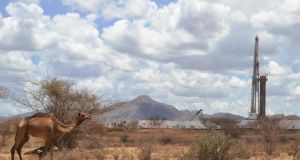 An oil drilling block managed by Tullow Oil in Kenya where it says it continues to make good progress. Photograph: AFP

Investment banks and securities firms underwriting a $750 million (€706 million) Tullow Oil share sale are on track to avoid being left holding large amounts of unwanted stock as potential new investors actively snap up rights to participate in the deal, according to traders and analysts.

The price of shareholder rights to participate in the transaction – or what are known as nil-paid rights – has surged by 49 per cent since they began to trade on the London Stock Exchange on April 6th, according to stock exchange data. Rights linked to more than 81 million of the 466.9 million shares on offer have traded.

Tullow Oil unveiled plans to raise cash on St Patrick’s Day in a bid to cut its $4.8 billion net debt mountain as the oil exploration group prepares to refinance more than $3 billion of bank facilities this year. The group, which has written off more than $4 billion of prior exploration costs over the past four years, received a boost last week when Moody’s, one of the world’s main debt ratings agencies, raised its outlook on Tullow’s credit profile to ‘positive’ from ‘negative’.

“Interest levels are high for the Tullow rights, and as a result of the cash injection Moody’s have raised their rating on the debt,” said Darren McKinley, an analyst with Merrion Capital in Dublin. “But Tullow still has a significant amount of debt and, at current levels, the upside is limited we feel.”

The level of trading of the rights suggests that the company will see a number of new investors come on board, according to traders.

The capital raised, where the final date for investor take-up is set for April 24th, will improve the financial position of Tullow Oil as Aidan Heavey, the group’s founder and chief executive of more than three decades, hands over the reins to his current chief operating officer, Paul McDade. A spokesman for Tullow Oil declined to comment on share sale process.

The market value of the rights to buy the new Tullow shares at a discounted rate of £1.30 each have surged from 68.25p in London on April 6th to £1.02. This means that the rights – when added to the price of the new stock – are trading at a slight premium to where the stock is currently trading, at £2.285. The price of the rights peaked at £1.19, the day that Moody’s raised its outlook.

The share sale caps off an eventful nine months for Tullow, which has seen the company’s TEN project off Ghana begin to pump oil for the first time, while its flagship Jubilee project, also off Ghana’s coast, suffered technical issues on its floating production, storage and off-loading vessel.

The company also agreed in recent months to sell 21.6 per cent of its 33 per cent interest in the so-called Lake Albert Development Project in Uganda to French group Total and Chinese oil giant CNOOC for a total consideration of $900 million.

Tullow said the equity raised will help it to explore for more fuel around the Jubilee and TEN fields, as well as Kenya and other prospects across its portfolio.Tullow said in its annual report that it continues to make good progress in Kenya towards the “development of a major long-life, low-cost project with significant upside potential”. It would also allow the company to “take advantage of other opportunities that industry conditions offer,” it said.