Providence in partnership talks on ‘a number’ of projects 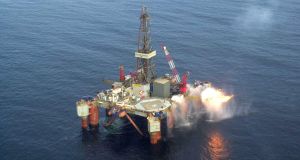 Providence Resource’s Ocean Nomad drilling rig at the Helvic oil field in the Celtic Sea. Discussions on selling a stake in its Barryroe oil field off the Cork coast are ongoing. File photograph

Providence Resource’s chief executive Tony O’Reilly jnr said on Wednesday that the oil explorer was involved in talks with potential partners on “a number” of its projects, though he declined to be drawn on when it would reach a deal on its key Barryroe field off the Cork coast.

Speaking to The Irish Times after the company unveiled a €20.5 million loss for 2016, Mr O’Reilly said: “There’s good interest being shown in a number of our assets, but I’m not going to be drawn on ranking [potential deals] at this stage. We feel happy with the level of real discussions.”

The oil company raised $70 million (€66m) last June in a rescue share sale to help meet a legal bill, repay more than $20 million (€18.6m) of debt and secure funds to tide it over until it sells a stake in Barryroe, targeted within 12 months of the fundraising. Crude oil prices have doubled since January last year to $56.4, recovering some of the ground lost over the previous 18 months.

The Barryroe project was found in 2012 to have more than 300 million barrels of recoverable oil. A previous “farm-out” agreement for the project fell through in 2015 as the chosen partner, known to be Sequa Petroleum, failed to raise the necessary money to participate.

The Druid and Drombeg fields are stacked on top of each other some 220km into the Atlantic Ocean. Providence has said that the Druid prospect has the potential to deliver 3.2 billion barrels of oil, while Drombeg may yield a further 1.9 billion barrels.

Mr O’Reilly said the deal would allow Providence to drill an exploratory line beyond the Druid field to Drombeg, which is 1,000m lower. “We’ve farmed down 30 per cent of our equity, but Cairn are paying up to 45 per cent of the well cost and some of our sunk costs.”

Sunk costs are expenses already incurred but cannot be recovered. Providence retains a 56 per cent controlling interest in the project.

A drill ship has been contracted to start drilling on the field, which is set to commence in June.

“We’ve been a lone voice in the wilderness for so long talking about Ireland being a hot spot for drilling activities, and now it’s happening,” said Mr O’Reilly. “There’s a lot of big companies doing a lot of big things. We’re pretty proud the people have come to our back yard.”