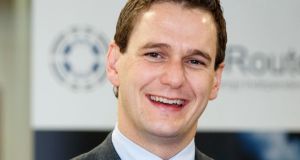 Irish energy trader ElectroRoute, in which Japan’s Mitsubishi Corporation bought a 60 per cent stake last year, has set up a UK office. It plans to use it to replicate a key part of its Dublin business, which finds buyers for renewable energy produced by infrastructure and financial funds.

The Donegal-registered company, which has its headquarters in Dublin, has appointed senior energy figure Tim Foster, from Norwegian hydropower group Statkraft, to head up its UK services unit. Mr Foster was responsible for developing the Norwegian company into a leading provider of power purchase agreements in the UK.

ElectroRoute, set up in 2011, is essentially made up of two businesses: electricity and gas trading across the Irish, UK, Dutch, French, Italian, German and Spanish markets; and client services, where it helps renewable energy firms, often owned by financial investors rather than utility companies, gain routes to the wholesale energy markets.

The latter division, which is currently exclusively exposed to Ireland, has more than 600 megawatts under management, equivalent to the needs of about 350,000 Irish homes. Mr Foster will be responsible for building up a similar business in the UK for ElectroRoute, company chief executive Ronan Doherty told The Irish Times.

“We want to expand our Irish client services operation to over 1,000 megawatts – or one gigawatt – of assets under management over the next two years and develop a UK business of a similar size,” Mr Doherty said.

ElectroRoute’s staff has grown from 40 to more than 50 since Mitsubishi Corporation acquired the majority stake in October for an undisclosed firm.

“For the UK, [European] energy market integration rules are among the most benign areas politically,” he said. “There may be some tariffs or cross-border implications as a result of Brexit, but this area is well down the list of priorities. Either way, it makes no sense for the UK to unplug itself from Europe for gas or power.”

Some commentators say the political necessity to secure Irish power and gas supply post-Brexit, given that the Republic currently imports about 88 per cent of its energy needs from or through the UK, may give the UK a key bargaining chip in its exit talks with the EU.