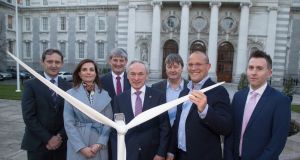 * The €700 million Oriel renewable energy project off the Co Louth coast looked for a long time like an ill wind farm that was never going to blow any good. The proposal, originally conceived around 2006, lured lots of high-profile backers, including Glen Dimplex founder Martin Naughton.

Initial efforts to get it going stalled early in this decade. This was partly because when he was energy minister Pat Rabbitte decided against approving offshore wind for price supports ultimately funded by consumers and businesses.

The now-defunct Gaelectric stepped in a few years later. Both that company and Oriel Wind Farm Ltd pledged to spend €80 million on a pilot version of the overall project in 2015. That never happened, and Gaelectric’s assets have since been sold off.

This week State-owned energy group ESB and Belgian group Parkwind announced that they were taking over, and planned to develop a wind farm that could supply enough electricity to power 280,000 homes at an estimated cost of €700 million.

That is a big sum, close to twice what it would cost to build an average-sized gas-fired electricity generator, but it is in no way out of line for offshore wind projects of this size. Nor is it that different from original estimates of the likely bill for Oriel when it was first proposed more than a decade ago.

The question is, if the original developers felt that they needed price supports to make Oriel work, and their successor was only willing to take a limited initial punt on the project, what is different now?

The answer could be that the ESB and Parkwind are specialised energy companies with the resources and expertise to build and operate Oriel profitably. Nevertheless, until the pair have proved that it can work they will have to forgive everyone else for being sceptical as so far this project has generated no electricity, only an awful lot of hot air.

* This article was edited on January 30th