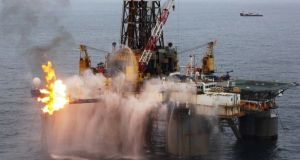 The study estimates that demand for electricity in Ireland may rise by up to 57 per cent in the next decade, with gas consumption expected to jump by 35 per cent by 2030, and oil rising by 15 per cent

A significant number of new jobs could be created following an oil or gas find in the Republic, according to a new report.

According to the study, which was prepared by PwC on behalf of the Irish Offshore Operators’ Association (IOOA), an oil find could create 1,200 jobs annually and provides revenue of up to €8.5 billion in corporation tax.

The research indicates a gas find could create a further 380 jobs each year and deliver tax revenues of €2.4 billion to the State.

The study also shows that the Republic is currently 100 per cent reliant on imports to meet its demand for oil, and may soon find itself in a similar situation with gas.

Currently, just over 30 per cent of gas is imported, primarily through the UK. However, it warns that with production from the Corrib declining, unless there is a gas find locally in the coming years, all of the State’s gas will have to be imported by the end of 2031.

The study estimates that demand for electricity in Ireland may rise by up to 57 per cent in the next decade, with gas consumption expected to jump by 35 per cent by 2030, and oil rising by 15 per cent.

“Developing indigenous offshore oil and gas resources can reduce import costs and carbon emissions and provide cleaner fuel sources for Ireland. It will secure our supply, generate significant amounts of revenue and create high-value jobs, particularly in the south and west,” said Prof Pat Shannon, chairman of the IOOA.

The study forecasts that an oil find yielding 550 - 600 million barrels could result in total gross value of between €1.6 billion and €3.2billion over the full 32-year project life cycle, while a gas find yielding 800 billion standard cubic feet of gas could generate gross value of between €850 million and €94 million over a similar period, assuming that domestic enterprises can increase supply to the industry.