Cantillon: ‘Farmers’ Guardian’ does a hatchet job on scientists behind ‘Lancet’ study 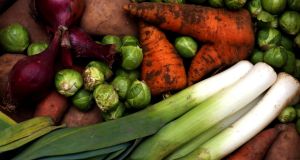 To their credit, agri-food groups here – Bord Bia, the Irish Farmers’ Association and the Ibec group Meat Industry Ireland – refrained from such petty jibes, keeping their criticism to the report’s findings and its recommendations. Photograph: David Davies/PA Wire

In sports parlance, it’s called playing the man not the ball. In its reaction piece to this week’s Lancet study on meat consumption and the environment, the UK’s Farmers’ Guardian decided to do a hatchet job on some of the scientists involved.

“She has previously compared meat eaters to smokers, believing they should be having their meal outside of the restaurant,” the paper said of Christiana Figueres, one of the study’s main contributors and a former executive secretary of the United Nations’ Framework Convention on Climate Change.

Khaled bin Alwaleed, another contributor, was described as a Saudi prince, who sees dairy as “the root of all environmental evil”. Fellow author Walter Willett, a distinguished Harvard food scientist, was tagged with having claimed that one in three early deaths could be saved if we all gave up meat.

The implication of these quasi-smears was obviously that this was merely a stitch-up job by militant vegetarians rather than a peer-reviewed study in one of the most respected medical journals in the world. In the febrile atmosphere of Brexit and Trump, personal attacks like these are almost the norm. Brexiteers have impugned the integrity of the judiciary and more recently the UK treasury over its Brexit forecasts, insisting they are marching to the tune of remainers. In the previous eras, these attacks would have been considered attacks on the state itself.

To their credit, agri-food groups here – Bord Bia, the Irish Farmers’ Association and the Ibec group Meat Industry Ireland – refrained from such petty jibes, keeping their criticism to the report’s findings and its recommendations. Kerry TD Danny Healy-Rae, however, couldn’t help himself, claiming: “Them fellas that are talking about stopping eating meat never worked hard.”

The study’s conclusions in relation to meat were uncompromising. “Unhealthy diets pose a greater risk to morbidity and mortality than does unsafe sex, and alcohol, drug, and tobacco use combined,” it said. This comes in the wake of the World Health Organisation’s classification of red meat as a carcinogen.