Comcast will hope Sky can avoid repeat of US cord-cutting 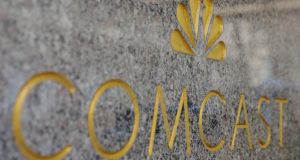 From now on, it will be Comcast’s quarterly earnings reports that give us a snapshot of what is happening at Sky. Photograph: Lucas Jackson/Reuters

A consequence of Sky’s delisting from the London Stock Exchange in November, following its takeover by US giant Comcast, is that the European pay-TV provider and broadcaster will no longer be publishing quarterly earnings updates in its own right.

As a source of information about its business here, they were imperfect. Like many companies, Sky did not break out its operation in the Republic from its UK one when it came to meaningful metrics such as revenues, profits and subscriber numbers.

But what Sky told investors and analysts every three months still yielded the odd nugget about the state of play in the European media market, as the company is at the frontline of several media trends - most notably, the belief that consumer appetite for pay-TV packages at premium prices could wane in the era of over-the-top (OTT) internet players, led by Netflix.

From now on, it will be Comcast’s quarterly earnings reports that give us a snapshot of what is happening at Sky. Comcast “won” the company after it comprehensively outbid Rupert Murdoch’s 21st Century Fox in a rare blind auction held by the UK’s Takeover Panel last September.

The US cable giant, which also owns the film and television company NBCUniversal, yesterday presented its first set of results following the completion of the acquisition. They didn’t reveal anything that would make it regret its outlay. Sky’s addition of 164,000 customers in the fourth quarter was slower than it was a year earlier, but overall its revenues were doing nicely, up almost 6 per cent.

Comcast is “excited about its future and the potential of our combined company in 2019 and beyond”, says chief executive Brian Roberts. What this means in real terms for Sky’s employees, operations and more than 23.6 million subscribers across Europe remains to be seen.

One trend it will want to avoid repeating in Europe is the TV package “cord-cutting” that has so affected the US media market. But updates on Sky’s fortunes, courtesy of its new majority owner, will inevitably contain even broader brush strokes than those that were published in its days as an independent company.